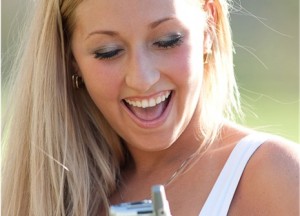 Remember in 2005 when we first heard about “sexting”?

In a culture where kids grow up inundated with sexual language, sexual images, sexual music, sexual television, sexual education and encouragement to explore their sexual selves — parents, nonetheless, expressed horror to learn that kids were sending nude and sexually suggestive or explicit pictures to each other with their mobile phones.

MTV made a website, A Thin Line, so parents and teens can get information about these issues. They say that for some people, “it’s no big deal.” They acknowledge, “real problems can emerge when the parties involved are under 18, when people get pressured into sexting, and when sexts go viral.” They suggest kids think about what they are doing first, choose a way to express their “hotness” that won’t put them at risk for major overexposure, make sure they are doing it without pressure, and reflect on where the picture may surface on the internet because it could harm their reputation.

No, the problem just stepped up to a whole new level. Mobile phones now come equipped with high definition video cameras. Parenting Today’s Kids reports that the new epidemic sweeping teen behavior now is called “sexcasting.”  Kids are broadcasting nude and sexually suggestive or explicit videos of themselves not just to friends with phones, but for the whole world to see on the internet. They are not just sharing videos of themselves, but of others, and sometimes without the other person’s consent.

According to a 2011 digital abuse study conducted by MTV and the Associated Press this generation of young adults is navigating their sexuality and first sexual experiences in an environment unlike any before — and technology is responsible. (More on that below.) 71% of youths age 14-24 years old admit that sexting is a “serious problem.” Here are some other numbers from the study that should make any parent shudder.

Parenting Today’s Kids offers the usual practical tips, consistent with MTV’s advice. Keep communication open, warn kids of the legal dangers, talk about the emotional price tags, know what your child is doing with his devices, remember that smart phones are powerful tools, there is no substitute for a watchful parental eye.

Will that solve the problem? Why hasn’t advice like this helped?

With all these studies and advice, something is still missing. It is like everyone knows this is wrong, but no one saying why. Seriously, did we need a pediatric study to tell us that teen sexting and sexcasting is linked to real-world risky sexual behavior?

Part of the problem is that parenting articles often leave well-intended parents with a misleading sense of needing to check the box. “If I do X, then Y will not happen.” The parent does X, and then is surprised when Y happens anyway. By the time a parent realizes that the specific advice is not the magic solution, it is too late. A pornographic video of someone’s daughter is right there on the web for the wide world to see, and a family is in crisis.

The deeper problem is that so many parents today have never understood the importance of teaching a kid about morality from a very young age. They follow the popular culture norms that say we should be sure that kids feel good about themselves, praise them for mediocrity, and allow them to explore all manner of sexuality because that’s just what kids do.

Kids are no longer taught about right and wrong, good and evil, virtue and vice. Words like “sin” and “immoral” are taboo. Without those concepts, though, it is impossible to teach a moral code. Without a moral compass, an adolescent is left to toss about in the storms of temptation without anything solid to hang on to or any light to guide the way.

These “let’s sit down and talk” approaches will not work if a moral foundation has not already been instilled, and the connection between actions and consequences, freedom and responsibility have not been taught. How do you have meaningful conversation about “emotional price tags” if a kid doesn’t understand the concept of guilt? How do you have anything more than a hollow parental monologue if the kid has never learned why he needs to respect authority? Warning the youth of the legal consequences may scare them briefly, but that warning is easily overridden by peers who testify to its rarity. Installing parental controls on digital devices will only slow down a determined teenager, and ultimately, you can’t put parental controls on everyone else’s phones.

So where to start?

Well, it’s not what you’ll hear in popular media, but the Catechism of the Catholic Church lays a timeless moral foundation in the mind of a child. It has long been recognized that children need religious moral teaching as much as, if not more so than, academic teaching. It gives them fundamental explanations about their existence.

God made you because He loves you. God created each of us unique, a body and a soul. God made you in His image, with an intellect to think and learn and a will to chose right from wrong. God wants you to be happy, on earth and forever in heaven, so He gave us rules to know how to live.

We are born with original sin. Baptism washes it away and fills you with grace, the Holy Spirit living in your soul. God the Father sent His Son to save us. Christ understands temptation. You will feel tempted to commit sin, but I’ll teach you how to practice the virtues of prudence, justice, temperance, and fortitude. I’ll help you avoid vice.

When you sin, you hurt yourself, you hurt others, and you hurt God. Christ who redeemed you with His life, death, and resurrection will forgive you if you sincerely repent and wish to do good. You are a person worthy of dignity, an adopted child of God, eternally responsible for your actions. You can know the right thing to do, but it takes honesty and hard work. There is evil in the world, and it is never going to make you happy.

Life is a journey, this life is temporary and requires sacrifice. As your parent, I love you unconditionally, and will tell you the truth, even when it’s hard, striving to demonstrate in my own life the virtues to which you should aspire. I am praying for you daily, for protection from evil, for grace in your soul, for us to be together in heaven eternally.

…put everything else about life into context. Where did I come from? Where am I going? What is my life’s purpose? Why am I special? Who am I? Why is my body private? Why should I not let myself be treated like an object? Why does sin imprison me? Why does virtue make me free? Why do I want to know and be known, love and be loved, so much that I’ll do anything to get it? Who loves me? What is real love?

Those conversations will not ensure that your kid will never give into temptation to use a mobile device in inappropriate or dangerous ways, but it lays a framework for addressing this and many more issues. Without these discussions about moral foundations, a teen or young adult has no context for properly forming his or her conscience.

MTV is right. We do live in a time when this generation of young adults is navigating their sexuality and first sexual experiences in an environment unlike any before, but it’s not really technology that is the culprit for their confusion. It’s that our youth have lost a grounding in ancient truths of human nature because parents stopped teaching it to them.