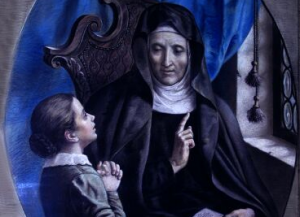 This year January 27th falls on the Third Sunday of Ordinary Time. Ordinarily the Catholic Church would celebrate the memorial of St. Angela Merici, an Italian saint on this date. When I first heard the story of St. Angela Merici in the college seminary, I was struck by the similarities St. Angela shared with [Sister] Adele Brise, both in their life, in received messages, and their respective missions.

In 1859, the Blessed Mother appeared to Adele, exhorting her to teach the young people their catechism, how to sign themselves and what they needed to know for salvation. On December 8, 2010, Bishop David Ricken, declared with moral certainty, although not obligatory, that the apparitions received by Adele Brise were worthy of belief.

Below are the similarities I found:

* St. Angela was the founder of the Ursaline order. Sister Adele was instructed by the Ursaline Sisters in Belgium and had a great desire to enter their congregation. At a young age Adele and a few of her friends entered into a pact to join the Ursalines. Adele, however, immigrated to the United States and this dream was never realized.

* St. Angela was a tertiary of St. Francis and Sister Adele founded a lay group of Franciscan tertiares who taught young people their catechism. A school was later built at the property of the Shrine of Our Lady of Good Help.

* St. Angela had another vision later in life in which she was told she should form a community of virgins who were to dedicate their lives to teaching. Adele founded a lay group of virgins, dedicated to teaching, in order to fulfill the request of Our Lady to gather the children and teach them their catechism.

* Both had a great desire to teach the young people! St. Angela was “Convinced that the great need of her times was a better instruction of young girls in the rudiments of the Christian religion, she converted her home into a school where at stated intervals she daily gathered all the little girls of Desenzano and taught them the elements of Christianity. “ (New Advent). Adele founded a group of lay sisters to teach on the shrine property, fulfilling the message given to her. Later, Adele’s dwindling order was assumed by the Bay Settlement Sisters, who staffed schools in the Diocese of Green Bay.

* Lastly, each wrote letters to the families of students. An example of St. Angela’s is provided in the Office of Readings (Proper of Saints) found in the four volume Liturgy of the Hours. Similarly, the Diocese of Green Bay Archives has copies of correspondences between Adele and families, in which she shared the story of the apparition, an update on their son or daughter, and a request for tuition payment.

In comparing the lives of St. Angela Merici, who was born in 1470 and died in 1540, to the life of Adele Brise, of the 1800’s, both share commonalities in their life and vocational paths. From physical problems to visions they both shared a similar mission; I think you could say they are two sides of the same coin.