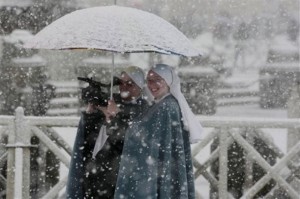 Across Italy, up and down both coasts, one notices a very unusual sight.  Driving down the Adriatic coast of Italy, along the eastern provinces known as Le Marche, all of the palm trees in sight are leafless.  Along beautiful beachfront boulevards the trees still stand tall, and look strong, but with no tops.  For the last several years some sort of critter, a beetle or other sort of bug, has been infesting palm trees, and rotting them from the inside out.  For now the trunks will remain, but the danger is becoming a reality that soon many seaside villages will be without this symbol of tropical repose.

Even in places where great care is taken to bring an end to the creature, failure is met at every turn.   We have a palm tree which is dying, although the experts were called in, inserted drainage tubes, and have treated the tree several times.  Only a few spare leaves remain green: the rest have fallen away or been pruned off, which I suppose means the process of dying from the inside out is already fairly advance.

Last week, snow fell on Rome for the first time in two years.  A few years ago, snow fell in great abundance for a couple of hours, but it all melted away within those hours.  As one official said at the end of the two hour snowstorm, “la poesia e finita,”  the poetry is finished.  This year, in preparation, schools were closed and orders were issued against using the city streets.  When it began to snow everyone headed home from the office.  A 10 minute drive became, for me, a two hour drive.  That night even more snow fell, so when we woke up on Saturday morning, about 5 inches had fallen, fallen upon a city which had not had measurable snowfall remain overnight for over 25 years.   Decrees were issued by the highest civil authorities, no driving on the city streets without chains, no schools or unnecessary offices to be open for three days.  In what foreigners considered a bizarre twist, entrances into all the parks of Rome were closed and locked.  For many of the Romans, it was a wonderful lark, an event to be treasured and remembered throughout a lifetime.  Many flocked to the parks, climbed fences or walls, and took their children sledding.  Neighbors enjoyed a chance to see each other walking through the streets, children making snowmen for the first time, or tossing a snowball at a friend. Sadly, in the mountains outside of Rome, some villages lost power and water, and still have not been reached by aid workers. Store shelves in those villages are reportedly empty, people beginning to worry.

One does not normally think of palm trees and snowfall at once, and indeed, they seem to be natural enemies of each other.  Coming from northern climes, it is easy to think that any snow falling upon a palm tree would kill it.  As mentioned, many remedies have been tried against the creature which is killing the palm trees of Italy.  One recent sign of hope is the very snow and cold which is bothering many people, and also apparently may also afflict the creature causing all of the fuss in the eternal city.  Apparently, and hopefully, although all the modern remedies, chemicals, -cides of all manner have failed, this creature may be killed by the snow and cold which has settled upon the peninsula, for cold is its natural predator.  It is unclear whether this snow may save the palm trees of Rome, but this is a last and great hope.

Crises can develop in our lives, and we feel beset upon all sides.  Financial misfortune, troubles with children or parents, illness can get us down, making us feel as if we are rotting from the inside.  Sometimes, when we feel we are at our weakest, yet another event happens which appears to be the last straw, which seems to take away our hope.  Years later, in retrospect, we can often see in the patterns of our lives how some later “crisis” has helped to ease some previous one, how a bright hope has sprung from chaos.  The much grieved death of a loved one which causes us to reconnect with someone who becomes a pillar of strength for us, financial reversal which causes us to simplify our lives, a drinking binge which ends in the recognition of the need of sobriety, the seeming happenstance of one action can lead to all kinds of possibilities.

Hopefully we have faith which can lead us through the dark nights, an abiding spirit of confidence that Our Lord, who greatly loves us, can shower graces upon us even during the dark nights, and can work all things together for a greater good.  So, when you face difficult times, when you face dark nights, turn toward Him, have confidence in His love and providence, that an unexpected snowfall might save the palm trees in your own life, that even during the seeming darkest night, a glimmer of Light shines which will lead you through.