Trending Now
You are at:Home»Featured»Snowmen: A Film for Humans
By Susan Soesbe on October 21, 2011 Featured, On TV and Movies 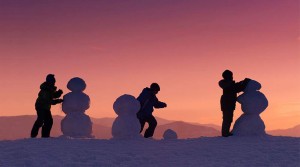 As I walked into the theater for a screening of Snowmen, the film’s publicist handed me materials and remarked that there was no sex and no explosions, “just cute kids in snow.” She was right, but that doesn’t fully explain why this movie is good. Goodness cannot be defined by what it is not.

In spite of its fluffy title and family-friendly synopsis, Snowmen accomplishes something rarely seen in movies today. This coming-of-age film shows that a person can overcome childish self-focus and gain an adult perspective without becoming disenchanted. It shows that enlightenment does not equal cynicism. In doing so, it extends hope to moviegoers who have become accustomed to films for young people that pander to their immaturity or, conversely, burden them with dark messages of despair. Snowmen is stands out as a movie that doesn’t define maturity by disillusionment or sexual awakening.

Eight-year- old Billy Kirkfield (Bobby Coleman) wants to be remembered forever. A recent bout with cancer has rendered him weak and bald, but he is determined not to die a loser. Certain that his death is imminent, Billy wonders what he can do to make sure that he is not forgotten. A surprise discovery in the snow sparks an idea for setting a new world record. If he reaches his goal, Billy’s name will be in the Guinness Book of World Records, and “It will always be proof that I did something important.”

Billy’s single-minded pursuit of this goal is hindered by his need for help, the vagaries of weather, and, of course the school bully (Josh Flitter of Ace Ventura, Jr.). But the most fearsome giants Billy faces are the prospect of death, and his fear of obscurity.

The one thing that made me tense was the affection between father and son. Billy’s father Reggie (portrayed convincingly by New Jersey veteran Ray Liotta) warmly expresses his love with hugs and kisses. I kept expecting it to turn mawkish, ridiculous, or dark and creepy. It never did. It was just… healthy. Normal. Wholesome. Yeah. Weird, isn’t it? And there’s a Jamaican character that lives on the Canadian prairies, but there are no race issues to resolve and no new-kid-on-the-block problems to tackle. How refreshing. Howard Garvey (Bobb’e J. Thompson) is not The Black Character or The Outsider, he’s just Howard. And while Billy describes his friend Lucas (winningly portrayed by newcomer Christian Martyn) as “the biggest wimp in school,” he is not The Wimp. He’s just Lucas. There are, however, several stock characters, such as The Bully, The Girl, and the stern but compassionate school principal. Christopher Lloyd makes a brief but effective appearance as a not-weird-at-all cemetery caretaker.

Postmodern, and post-Postmodern authors and filmmakers, in response to the excesses of Romanticism, took pains to deconstruct the Romantic worldview, at times becoming cold and even savage. The world of film has evolved into a place peopled with antiheroes, overwhelmed everymen, one-dimensional villains, gritty heroes, quirky underdogs, spunky heroines and evil succubi, sidekicks and clowns, Mittys and Prufrocks. One almost begins to feel that normal, average everyday folks are a fringe element, another species of freak. Snowmen is not afraid to show its everyday folks, doing their jobs, paying their bills, having snowball fights and pondering immortality. Ironically, that’s what makes it stand out.

Snowmen is two parts The Wonder Years and one part The Death of Ivan Ilyich. Writer/director Robert Kirbyson explains, “Events are presented as they seemed to me as a child: dangers exaggerated, victories sweeter, and adventures amplified.” This approach actually makes the movie seem more realistic. As adults, we have a pretty good idea of what will happen next. But life is unpredictable, and even those of us with many years of experience cannot foresee every bend in the road.

For Billy, victory means knowing he doesn’t have to prove himself or achieve fame in order to have a meaningful life. He is already significant because of his relationship to his creator and to his fellow humans. Kirbyson beautifully portrays the epiphanic moment at which Billy is set free from his fears.

The best kids’ movies are the ones that reach Mom and Dad too. There are a few gross-out scenes in this film, and some of the suspenseful moments might frighten younger children.  Still, Snowmen is not only family-friendly, but also family-uplifting.