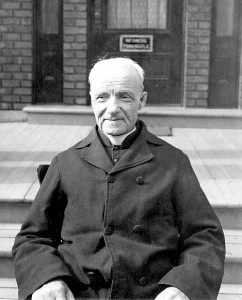 In 1845, St. Andre Besette was born in Canada, in a small town southwest of Montreal.  He was a Holy Cross Brother, who served for decades as porter (or doorman) for the college of Notre Dame in Côte-des-Neiges, Quebec.  In addition to his duties as receptionist, his tasks included washing floors and windows, cleaning lamps, bringing in firewood and carrying messages.  After he died in 1937, at the age of 91, a million people filed past his coffin.

St. Andre is credited with thousands of reported miraculous healings. He was declared venerable in 1978 and was beatified in 1982. Pope Benedict XVI approved sainthood for Blessed André on February 19, 2010, with the formal canonization taking place on October 17, 2010