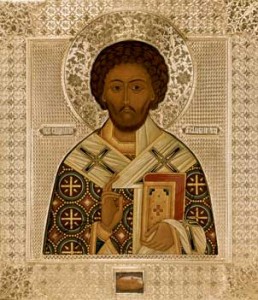 ST. LUCIAN was born at Samosata in Syria. Having lost his parents in his youth, he distributed all his worldly goods, of which he inherited an abundant share, to the poor, and withdrew to Edessa, to live near a holy man named Macarius, who imbued his mind with a knowledge of the Holy Scriptures, and led him to the practice of the Christian virtues.

Having become a priest, his time was divided between the external duties of his holy state, the performance of works of charity, and the study of sacred literature. He revised the books of the Old and New Testaments, expunging the errors which had found their way into the text either through the negligence of copyists or the malice of heretics, thus preparing the way for St. Jerome, who shortly after was to give to the world the Latin translation known as “The Vulgate.”

Having been denounced as a Christian, Lucian was thrown into prison and condemned to the torture, which was protracted for twelve whole days. Some Christian visited him in prison, on the feast of the Epiphany, and brought bread and wine to him; while bound and chained down on his back, he consecrated the divine mysteries upon his own breast, and communicated the faithful who were present. He finished his glorious career in prison, and died with the words, “I am a Christian,” on his lips.

Reflection.—If we would keep our faith pure, we must study its holy truths. We cannot detect falsehood till we know and love the truth; and to us the truth is not an abstraction, but a Person, Jesus Christ, God and Man.