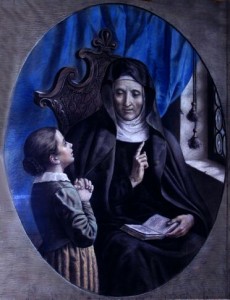 Angela Merici was born in 1474 at Desenzano, in the territory of Venice.  From her earliest years, she kept the strictest guard over the lily of her virginity, which she had resolved should never be taken from her.  Hating all feminine adornments, she made a point of making the beauty of her features and her attractive hair unsightly, that she might find no favor save with the heavenly Spouse of souls.

While yet in the bloom of her youth, she lost her parents, and tried to retire into a desert, that she might lead a life of penance; but being prevented by an uncle, she fulfilled at home what she was not permitted to do in a wilderness.  She frequently wore a hairshirt, and took the discipline.  She never ate meat, except in case of sickness; she never tasted wine, except on the feasts of Christmas and Easter.  At times she would pass whole days without taking any food.  Devoted to prayer, she took her very short rests on the ground.

When the devil sought to beguile her in the form of an angel of light, she quickly detected him, and put him to flight.  At length, having resigned the fortune left by her father, she accepted the habit and rule of the Third Order of St. Francis.  At Brescia, being commanded by a voice from heaven and by a vision, she founded a new society of virgins, under a fixed discipline and holy rules of life.  She put them under the title and patronage of St. Ursula, the brave leader of virgins.  She foretold, shortly before her death, that this institute, the Order of Ursulines, would last to the end of the world.  She died in 1540 and was canonized in 1807.

Reflection.  To will is for us; to accomplish for God, who chooses the times and the means.  After Angela’s death the Ursulines order grew and spread throughout the world.