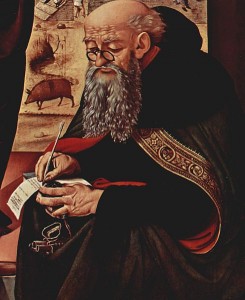 ST. ANTHONY was born in the year 251, in Upper Egypt. Hearing at Mass the words, “If thou wilt be perfect, go, sell what thou hast, and give to the poor,” he gave away all his vast possessions. He then begged an aged hermit to teach him the spiritual life. He also visited various solitaries, copying in himself the principal virtue of each.

To serve God more perfectly, Anthony entered the desert and immured himself in a ruin, building up the door so that none could enter. Here the devils assaulted him most furiously, appearing as various monsters, and even wounding him severely; but his courage never failed, and he overcame them all by confidence in God and by the sign of the cross. One night, whilst Anthony was in his solitude, many devils scourged him so terribly that he lay as if dead. A friend found him thus, and believing him dead carried him home. But when Anthony came to himself he persuaded his friend to carry him, in spite of his wounds, back to his solitude. Here, prostrate from weakness, he defied the devils, saying, “I fear you not; you cannot separate me from the love of Christ.” After more vain assaults the devils fled, and Christ appeared to Anhtony in glory.

His only food was bread and water, which he never tasted before sunset, and sometimes only once in two, three, or four days. He wore sackcloth and sheepskin, and he often knelt in prayer from sunset to sunrise. Many souls flocked to him for advice, and after twenty years of solitude he consented to guide them in holiness—thus founding the first monastery.

His numerous miracles attracted such multitudes that he fled again into solitude, where he lived by manual labor. He expired peacefully at a very advanced age. St. Athanasius, his biographer, says that the mere knowledge of how St. Anthony lived is a good guide to virtue.

Reflection.—The more violent were the assaults of temptation suffered by St. Antony, the more firmly did he grasp his weapons, namely, mortification and prayer. Let us imitate him in this if we wish to obtain victories like his.