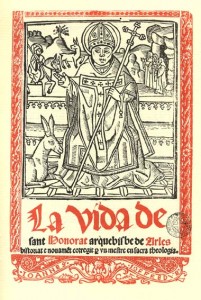 ST. HONORATUS was of a consular Roman family settled in Gaul. In his youth he renounced the worship of idols, and gained his elder brother, Venantius, to Christ. Convinced of the hollowness of the things of this world, they wished to renounce it with all its pleasures, but a fond pagan father put continual obstacles in their way.

At length, taking with them St. Caprais, a holy hermit, for their director, they sailed from Marseilles to Greece, with the intention to live there unknown in some desert. Venantius soon died happily at Methoni, Greece, and Honoratus, being also sick, was obliged to return with his conductor to France. He first led a hermitical life in the mountains near Frejus. Two small islands lie in the Mediterranean less than 20 miles SE, and on the smaller, now known as St. Honoré, our Saint settled. Being followed by others, he founded the famous monastery of Lerins, just south of Cannes, about the year 400.  The Abbe of Lerins still stands.

Some of his followers he appointed to live in community; others, who seemed more perfect, in separate cells as anchorets. His rule was chiefly borrowed from that of St. Pachomius. Nothing can be more amiable than the description St. Hilary has given of the excellent virtues of this company of saints, especially of the charity, concord, humility, compunction, and devotion which reigned among them under the conduct of our holy abbot. He was, by compulsion, consecrated Archbishop of Arles in 426, and died, exhausted with austerities and apostolical labors, in 429.

Reflection.—The soul cannot truly serve God while it is involved in the distractions and pleasures of the world. St. Honoratus knew this, and chose to be a servant of Christ his Lord. Resolve, in whatever state you are, to live absolutely detached from the world, and to separate yourself as much as possible from it.