Trending Now
You are at:Home»Church Street»Saint of the Day»St. Anthony Mary Zaccaria
By Catholic Lane Administrator on July 5, 2014 Saint of the Day 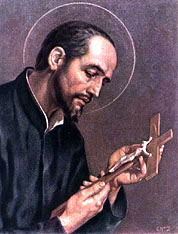 Anthony was born in the city of Cremona, Italy in 1502 to noble parents. When he was two his father died and he was brought up as an only child by his mother. At an early age, he took a private vow of chastity. He studied philosophy at the University of Pavia, and, from 1520, medicine at the University of Padua.  After completing studies in 1524, he practised as a doctor in Cremona for three years.

In 1527, he started studying for the priesthood. Because of his already extensive studies and his Christian upbringing, he was ordained in 1528. Having explored his calling for two years, mainly working in hospitals and institutions for the poor, he became the spiritual advisor to Countess Ludovica Torelli of Guastalla (then the tiny County of Guastalla) in 1530, and followed her to Milan. While there, he laid the foundations of three religious orders: one for men (the Clerics Regular of St Paul, commonly known as the Barnabites); a female branch of uncloistered nuns, the Angelic Sisters of St. Paul; and a lay congregation for married people, the Laity of St. Paul, originally called the Married of St. Paul, and sometimes referred to in North America as the Oblates of St. Paul. The three foundations met regularly and engaged together in various forms of apostolic action. Their aim was the reform of the decadent society of their day, beginning with the clergy and religious.

The Barnabites’ main devotions were the teachings of Saint Paul and emphasis on love for the Eucharist and Christ crucified. Since the order criticized what they saw as abuses in the Roman Catholic Church, Zaccaria soon gained a number of enemies, and as the order’s founder, he was twice investigated for heresy, in 1534 and 1537. He was acquitted both times. In 1536, he stepped down as general of the order and went to Vicenza, where he reformed two convents and founded the order’s second house.

While in Vincenza, he popularized for the laity the Forty-hour devotion–solemn exposition of the Blessed Sacrament for the adoration of the faithful—accompanied by preaching. He also revived the custom of ringing church bells at 3 p.m. on Fridays, in remembrance of the Crucifixion. He left only a few writings: twelve letters, six sermons, and the constitution of the Barnabites.

While on a mission to Guastalla, Italy, in 1539, he caught a fever. Combined with the strict penances he performed, his health waned and he died on 5 July 1539, at the age of 37.

He was buried in the convent of the Angelics of St Paul, the female branch of the Barnabites, in Milan. 27 years after his death, his body was found to be incorrupt. His mortal remains are now enshrined at the Church of St. Barnabas in Milan, Italy. He was honored as a saint by the Barnabites and others, but his cult was not confirmed until 3 January 1890, when Pope Leo XIII beatified him. The same pontiff canonized him on 27 May 1897. His feast day is celebrated on 5 July.

In art, he is depicted wearing the black cassock of the order and holding a lily, cross, chalice and/or host.