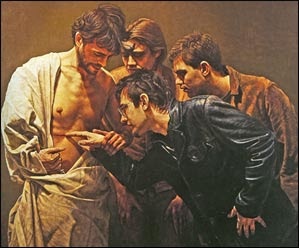 Thomas Welbourne had no children. His wife Mary had been pestering him, even pleading about it, for years. He hadn’t decided against having them, but then, he never quite made up his mind to have them. He had never quite made up his mind about anything much. He was waiting for something – for something to happen. The problem was that he wasn’t quite sure what he was waiting for.

“Tom, we don’t have forever to wait around while you make up your mind. We probably only have a few more years to act, or we’ll be alone. We’ll die alone.”

Thomas just shrugged his shoulders. If he had looked harder, he might have seen the hurt look in Mary’s eyes, the anxiety that had been building up in her for years. She hadn’t been able to really engage him in meaningful conversation for years. He had slowly drifted further and further away from her. She was about to speak again when he turned on the TV. He flipped through the stations without landing on a given station long enough to really follow what was happening. He would flip like that for hours, not really watching anything, just flipping. It would drive Mary crazy and she would seek refuge in the backyard.

She sat on porch chair trying to pray. She didn’t really pray, because she didn’t really know how. She wasn’t sure what she believed, but she did believe in something. Something undefined, but real. She couldn’t talk to Thomas, but she could talk to this undefined something. Her marriage wasn’t real, but this was. She sat out back watching the sun set, while Thomas endlessly flipped the stations. The light from the TV shone out through the window as it grew dark, casting a hollow glow on all that it touched.

Was it the hollow glow from the TV or something else that caught Mary’s eyes? She had been lost in her thoughts, her inner monologue without a response, when she was suddenly aroused by a glow. It felt as if the glow came from inside of her, as if a response to the monologue had finally arrived. She opened her eyes and saw that glow was actually outside of her, not simply inside. She got out of her chair and followed the glow to the shed in the corner of the yard. Mary hesitated as she grew closer to the shed. The light was no longer a glow, but shone brightly as rays hit the grass from the shed windows. She didn’t know why, but felt the urge to kneel down. As her knees hit the grass where the beams of light lay, she felt a warmth inside of her that she hadn’t felt since she was a little girl. It reminded her of sitting on the couch on a bright sunny Saturday morning with her grandmother’s arms nestled tightly around her. The troubles with Thomas melted away and she felt peace inside of her. The warmth began to concentrate in her lower abdomen and even began to hurt as if her insides were burning. The light grew brighter as if in a final and intense flash and then faded away. She felt back abruptly into the grass, with her head violently jerked against the ground. She tried to yell out Thomas’s name, but couldn’t. She could hear his name echoing through her: “Tom! Tom!” But it never seemed to be able to exit her body.

She couldn’t tell how long she lay there in the dark seeing stars of unusual brightness, but eventually Thomas found her and carried her to their bed. All she remembered of the rest of that night was clinging to him more tightly than she had in years. Thomas broke into a cold sweat while Mary grasped him so intensely. The closeness made him feel uncomfortable, especially with her face looking so unusual, as if it were glowing. And then she had such an unusual smile. Something very abnormal had happened, something which broke the comfortability of their routine. Was this what he had been waiting for? The thought briefly entered his mind, and he pushed it out as quickly as could, though not without great effort.

It was late Sunday morning when Mary finally woke up. Thomas had woken up early, breaking Mary’s lock around him. He walked around the shed wondering what had happened to her the previous evening. Not finding any evidence, he returned to his depressed spot on the couch and began his ritual of surfing. Unsettled as he was, he flipped with even less of a pause between stations. His fingers grew sweaty and slipped off the buttons, which were worn down with overuse, no markings remaining on them. He tried to remount the button and resume his surfing when the TV suddenly turned off as Mary exited the bedroom.

Instead of greeting her, Thomas fidgeted around with the TV looking for something wrong with it. It would not turn back on and so he exited the house for the breaker box. As he opened it he couldn’t help but turn back nervously toward the shed. Something had clearly happened there last evening and it was quite unsettling not knowing what. He was afraid to ask Mary what had happened and quickly thought of reasons he might be able to leave the house. Seeing no problem with breaker switch and not thinking of a good excuse to leave, Thomas rushed through the door and mumbled to Mary, “I have to go.” Trying not to look at her, he headed to the garage door, though she cut him off on the way.

“Tom, stop. I need to talk to you.” He tried to continue, but his step felt constrained. “Tom, look at me.” He couldn’t.

“Something happened to me last night. Something wonderful. Our lives will never be the same.” That was exactly what he was fearing. Mary made tea and neatly arranged the cups around the corner of the kitchen bar. Thomas hated tea, but drank it as he felt that his fate was sealed. Something had happened last night and it was going to be forced upon him whether he liked it or not.

“Tom…” Mary continued, but Thomas could not really follow her. He was searching inside of himself, looking for something firm that he could rely upon to avoid what she was saying. He heard snippets.

“I felt something change inside of me.” He looked back to his childhood, his days at church, lessons at school, but could find nothing.

“First there was an inner light.” His parents seemed distant and could offer no light to his thoughts.

“Then I saw the same light outside of me.” What about his early days with Mary? Something felt different then. But it was gone.

“I knelt down in front of it.” And these fifteen lost years. What could be said of them?

“I could feel this burning sensation inside of me.” That was it!

“Mary, don’t you remember those visits you had to the psychiatrist? He said that your depression could lead to hallucination. That is why you started your meditation, to try to relax and calm your mind down. You worry so much about things. I wonder if we shouldn’t go back to the doctor. He might really be able to help.”

“Tom, this was something real, more real than anything else I have experienced. I felt like I found the thing, or maybe the person, I’m not sure, that I have been looking for all my life. I want you to come out and pray with me tonight. I want you to experience this like I did.” Thomas was pretty sure he did not want to pray with Mary. He sat in front of the blank TV screen, letting images pass through his mind as if the stations were flipping. He looked backwards scanning images from his life, searching for any meaning he could grab. He looked forward, groping for that thing for which he had been waiting. He couldn’t focus on anything long enough to really examine it, but the face of his wife kept standing out. Could she be right? he asked himself. He got up and walked out to the shed, images still flashing through his consciousness.

The sun was hanging low in the sky and it looked as if its reflection was the light he was seeking. But no, as the sun continued to fade, the light followed it into the west. Thomas stood up and looked defiantly toward the shed.

“God, you did not appear here! Why are you messing with my wife? I’m sick and tired of waiting for you, of waiting for something to happen in my life. There is nothing to wait for.” He dropped down to the ground and began pulling out blades of grass with his hands in frustration, sweat dripping down from his forehead. Inside of himself, he saw the emptiness confronting him clearly for the first time.  It’s darkness brought him to the point of despair. He looked up toward the shed again and yelled out (he couldn’t tell if he said it audibly or not), “If you are real God, if you care about me and my wife, show yourself to me!”

He wept for some time. Suddenly he felt an impulse to turn toward the house. As he did so, he saw Mary standing by the door, with a glow emanating from her skin. He slowly approached her and knelt down before her. She lowered her hand gracefully toward him, which he received with his left hand trembling. His right hand he raised toward her side, where he felt a warmth issuing from her abdomen. He felt something come over him, some kind of inexpressible emotion, as if something was dislodged from inside of him. A free flow of life that had been dammed up issued throughout his body. He looked up into Mary’s glowing face. She smiled at him and after a few moments quietly said to him, “Tom, I am certain that I am pregnant.”

Thomas’ heart sunk and he disbelieved her words. Looking into her eyes more intently he felt himself surrendering to the truth of her claim. As he did, he knew he had found what he was waiting for.