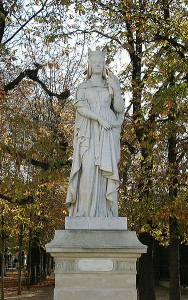 St. Bathilde, queen of the Franks

ST. BATHILDES was an Englishwoman, who was carried over whilst yet young into France, and there sold for a slave, at a very low price, to Erkenwald, mayor of the palace under King Clovis II.

When she grew up, her master was so much taken with her prudence and virtue that he placed her in charge of his household. The renown of her virtues spread through all France, and King Clovis II took her for his royal wife.

This unexpected elevation produced no alteration in a heart perfectly grounded in humility and the other virtues; she seemed to become even more humble than before. Her new station furnished her the means of being truly a mother to the poor; the king gave her the sanction of his royal authority for the protection of the Church, the care of the poor, and the furtherance of all religious undertakings.

The death of her husband left her regent of the kingdom. She at once forbade the enslavement of Christians, did all in her power to promote piety, and filled France with hospitals and religious houses. As soon as her son Clotaire was of an age to govern, she withdrew from the world and entered the convent of Chelles. Here she seemed entirely to forget her worldly dignity, and was to be distinguished from the rest of the community only by her extreme humility, her obedience to her spiritual superiors, and her devotion to the sick, whom she comforted and served with wonderful charity.

As she neared her end, God visited her with a severe illness, which she bore with Christian patience until, on the 30th of January, 680, she yielded up her soul in devout prayer.

Reflection.—In all that we do, let God and His holy will be always before our eyes, and our only aim and desire be to please Him.