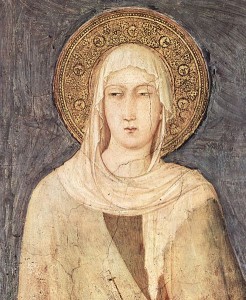 While the Saracen army of Frederick II. was ravaging the valley of Spoleto, a body of infidels advanced to assault St. Clare’s convent, which stood outside Assisi. The Saint caused the Blessed Sacrament to be placed in a monstrance, above the gate of the monastery facing the enemy, and kneeling before it, prayed, “Deliver not to beasts, O Lord, the souls of those who confess to Thee.” A voice from the Host replied, “My protection will never fail you.” A sudden panic seized the infidel host, which took to flight, and the Saint’s convent was spared. During her illness of twenty-eight years the Holy Eucharist was her only support and spinning linen for the altar the one work of her hands. She died in 1253, as the Passion was being read, and Our Lady and the angels conducted her to glory.

Reflection.—In a luxurious and effeminate age, the daughters of St. Clare still bear the noble title of poor, and preach by their daily lives the poverty of Jesus Christ.