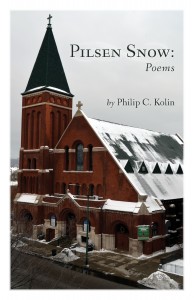 In Pilsen Snow, Philip C. Kolin has written a collection of poems that share his stories of growing up as one of many Czeck immigrants in Pilsen: a neighborhood located on the West Side of Chicago, Illinois.

I have had the privilege of reading Kolin’s poems over the years. His are of a standard that many, including myself, aim to achieve. It is with pleasure that I read his latest collection of poems in Pilsen Snow: Poems!

Whether or not you are familiar with the Pilsen neighborhood, this book will take you on a journey as he recalls events, individuals, lessons he’s learned, and his appreciation for a world of wonder and innocence that he once knew.

With poem titles like “First Confession,” “Speaking Czech,”and “The Procession,” Kolin gives his readers a treasure of insight into what it was like growing up Czeck in an American world.

In “Speaking Czech,” he writes, “…they disappeared into their father”s language and did not squander the air on English’s sparse 26 letters. Instead, they filled Chicago’s Pilsen with the bounty of Czech’s 44 characters.”

“The Procession” describes the May crowning, “Once a year in May, the block circling St. Pius turned into sacred ground. Even the Chicago Police Dept. agreed, corralling wooden horses on the side streets to keep drunks from crashing into the procession honoring the Blessed Mother.”

You can find this new book of poems at FinishingLinePress

Kolin’s accomplishments as a poet and an editor mark him as an important creative writer. Kolin has published 40 books. His most recent titles include Reading God’s Handwriting (Kaufmann Publishing), and Deep Wonder: Poems(Grey Owl Press).