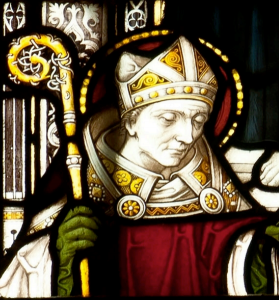 ST. GERMANUS, the glory of the Church of France in the sixth century, was born in the territory of Autun, about the year 469. In his youth he was conspicuous for his fervor. Being ordained priest, he was made abbot of St. Symphorian’s; he was favored at that time with the gifts of miracles and prophecy.

It was his custom to watch the great part of the night in the church in prayer, whilst his monks slept. One night, in a dream, he thought a venerable old man presented him with the keys of the city of Paris, and said to him that God committed to his care the inhabitants of that city, that he should save them from perishing.

Four years after this divine admonition, in 554, happening to be at Paris when that see became vacant on the demise of the Bishop Eusebius, he was exalted to the episcopal chair, though he endeavored by many tears to decline the charge. His promotion made no alteration in his mode of life. The same simplicity and frugality appeared in his dress, table, and furniture. His house was perpetually crowded with the poor and the afflicted, and he had always many beggars at his own table.

God gave to his sermons a wonderful influence over the minds of all ranks of people; so that the face of the whole city was in a very short time quite changed. King Childebert, who till then had been an ambitious, worldly prince, was entirely converted by the sweetness and the powerful discourses of the Saint, and founded many religious institutions, and sent large sums of money to the good bishop, to be distributed among the indigent.

In his old age St. Germanus lost nothing of that zeal and activity with which he had filled the great duties of his station in the vigor of his life; nor did the weakness to which his corporal austerities had reduced him make him abate anything in the mortifications of his penitential life, in which he redoubled his fervor as he approached nearer to the end of his course. By his zeal the remains of idolatry were extirpated in France. The Saint continued his labors for the conversion of sinners till he was called to receive the reward of them, on the 28th of May, 576, being eighty years old.

Reflection.—”In the churches bless ye God the Lord. From Thy temple kings shall offer presents to Thee.”