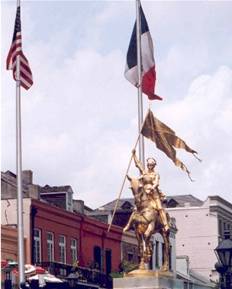 At Domremy, on the Upper Meuse River in France, was born on January 6, 1412, of pious parentage, the illustrious heroine of all time, St. Joan of Arc. Taught by her mother from earliest years to pray each night “O God, save France,” she could not help but conceive that ardent love for her country which later consumed her life.

While the English were overrunning the north of France, their future conqueror, untutored in worldly wisdom, was peacefully tending her flock, and learning the wisdom of God at a wayside shrine. But hearing Voices from heaven and bidden by St. Michael, who appeared to her, to deliver her country from the enemy, she hastened to the King and convinced him of her divine mission. Scarcely did her banner, inscribed “Jesus, Mary,” appear on the battlefield than she raised the siege of Orleans and led Charles VII to be crowned in the Cathedral at Rheims; this sacred edifice still stands in splendid condition.

Later, abandoned by her King, Joan fell into the hands of the Burgundians and the English, who gave her a mock trial and in 1431 burned her as a heretic. The chief inquisitor, the Bishop of Beauvais, illegally refused to forward her appeal to the Pope. Two decades later, the trial was reopened and Joan was posthumously exonerated. From the extensive records of these trials, a great deal more is known of St. Joan than of most of her 15th century contemporaries.

In the 20th century the Maid of Orleans came at last into her own, for with greater pomp than ever a king was crowned, and amid the acclamations of the whole world, on May 13, 1920, Pope Benedict XV proclaimed her St. Joan of Arc.