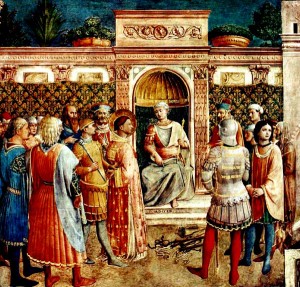 ST. JUSTIN was born of heathen parents at Neapolis in Samaria, about the year 103. He was well educated, and gave himself to the study of philosophy, but always with one object, that he might learn the knowledge of God. He sought this knowledge among the contending schools of philosophy, but always in vain, till at last God himself appeased the thirst which He had created.

One day, while Justin was walking by the seashore, meditating on the thought of God, an old man met him and questioned him on the subject of his doubts; and when he had made Justin confess that the philosophers taught nothing certain about God, he told him of the writings of the inspired prophets and of Jesus Christ Whom they announced, and bade him seek light and understanding through prayer. The Scriptures and the constancy of the Christian martyrs led Justin from the darkness of human reason to the light of faith.

In his zeal for the Faith he traveled to Greece, Egypt, and Italy, gaining many to Christ. At Rome he sealed his testimony with his blood, surrounded by his disciples. “Do you think,” the prefect said to Justin, “that by dying you will enter heaven, and be rewarded by God?” “I do not think,” was the Saint’s answer; “I know.” Then, as now, there were many religious opinions, but only one certainty, that of the Catholic faith. This certainty should be the measure of our confidence and our zeal.

Reflection.—We have received the gift of faith with little labor of our own. Let us learn how to value it from those who reached it after long search, and lived in the misery of a world which did not know God. Let us fear, as St. Justin did, the account we shall have to render for the gift of God.