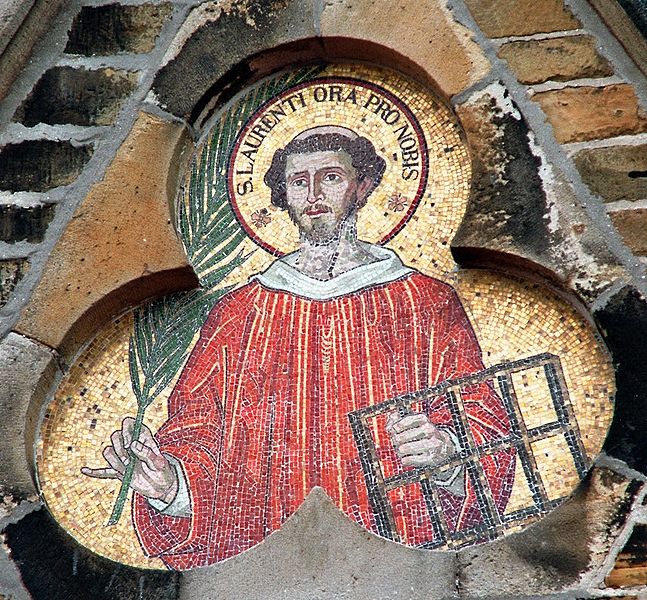 ST. LAURENCE (or Lawrence) was the chief among the seven deacons of the Roman Church. In the year 258 Pope Sixtus was led out to die, and St. Laurence stood by, weeping that he could not share his fate. “I was your minister,” he said, “when you consecrated the blood of Our Lord; why do you leave me behind now that you are about to shed your own?” The holy Pope comforted him with the words, “Do not weep, my son; in three days you will follow me.”

This prophecy came true. The prefect of the city knew the rich offerings which the Christians put into the hands of the clergy, and he demanded the treasures of the Roman Church from Laurence, their guardian. The Saint promised, at the end of three days, to show him riches exceeding all the wealth of the empire, and set about collecting the poor, the infirm, and the religious who lived by the alms of the faithful. He then bade the prefect “see the treasures of the Church.”

Christ, whom Laurence had served in his poor, gave him strength in the conflict which ensued. Roasted over a slow fire, he made sport of his pains. “I am done enough,” he said, “eat, if you will.” At length Christ, the Father of the poor, received him into eternal habitations.

God showed by the glory which shone around St. Laurence the value He set upon his love for the poor. Prayers innumerable were granted at his tomb; and he continued from his throne in heaven his charity to those in need, granting them, as St. Augustine says, “the smaller graces which they sought, and leading them to the desire of better gifts”

Reflection.—Our Lord appears before us in the persons of the poor. Charity to them is a great sign of predestination. It is almost impossible, the holy Fathers assure us, for any one who is charitable to the poor for Christ’s sake to perish.

The Divine Office accords this special prayer to him on his feast day (from the translation in “Christian Prayer”):

Father,
you called Saint Lawrence to serve you by love
and crowned his life with glorious martyrdom.
Help us to be like him in loving you and doing your work.
Grant this through our Lord Jesus Christ, your Son,
who lives and reigns with you and the Holy Spirit,
one God, for ever and ever. Amen.