Trending Now
You are at:Home»Learn & Live the Faith»Apologetics»Synods Are Not Councils
By Guy McClung, J.D., Ph.D. on August 10, 2015 Apologetics, Featured 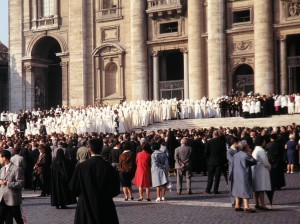 Last week when the “presider” at the “meal” at the local protestant-Catholic community preached that a “synod”” is a “council” and that throughout Church history “synod” and “council” have meant the same thing, it should have come as no surprise. But I was stunned. Of course, his words are utterly false. When the shock wore off, I realized that such preaching is simply the next step being taken by those who want to fundamentally change and subvert the Church.

Embedded progressives criticized the patriarchal pre-Vatican II hierarchy in their summary mantra. They said the sexist hierarchs wanted the laity to simply, and only, “pay, pray, and obey.” Over the last several decades, they condemned this type of ecclesiology and have co-opted  “pay and pray” by demanding more of the faithful’s “time, talent and treasure,” with the implicit emphasis on “treasure.”

They have paid out over $2,000,000,000.00 of the faithful’s money settling lawsuits against pederast and pedophile priests and bishops. They spent countless other millions on entities and programs whose missions and ethos are directly contrary to Church teaching. They have made numerous positions and offices at parishes full-time paying jobs – orthodox Catholics, true to the Magisterium, need not apply.  Yes, one “trick” question from a “deacon financial manager” at one church “business” was, “What do you think of the Catechism Of The Catholic Church?” Any applicant who said anything positive in reply did not get the job.

These folks  have also dictated word-for-word, mistranslation-for-mistranslation, illicit actions and gestures included, precisely how the faithful will pray. Seen anyone lately during the Our Father assume the orans posture reserved for the priest? Have you ever heard a dissenting presider change a word of the liturgy?

Still, over the decades, progressives fostered “cafeteria Catholicism” and “buffet belief” based on alleged private judgment, individual freedom, and the primacy of conscience. In short, they said you can disobey Church teaching and doctrine, but be sure to say you are following your conscience or exercising your religious freedom, and throw in some selected quotes from some Vatican II documents. There was no admonition about forming one’s conscience well in accord with the Church’s teachings. Nothing in terms of obeying anyone or anything. Freedom and Conscience-10, Obedience-0.

The “assembly” I was part of last week was told that “synod and council are interchangeable” terms. We were instructed in the history of synods beginning with the first “synod” in Jeruslem, recounted in the Book of Acts. Further we were told about the “Synod of Vatican II” of glorious memory – which “mandated” teachings which all the faithful accepted and to which all the faithful assented. With magisterial solemnity, the presider told us that over the last two millennia there have been synods of bishops who considered and decided profound theological issues and resolved ecclesial discussions, and then shared their wisdom with the faithful, the obedient faithful, in mandatory decrees.

At best this is pastoral malpractice. The irony is astounding, the hypocrisy jaw-dropping. It’s breath-taking. Yet it is all, unfortunately, believable. The protesting Catholics are getting their faithful ready to shut down all the “cafeteria Catholicism” franchise locations that they have opened since Vatican II. After all, a well-indoctrinated Cafeteria Catholic could, with learned ease, and felt-to-the-core righteousness, reject the new doctrines that are anticipated from the synod this Fall. They have been trained in dissent for over four decades.

What is the plan to instill solidarity into a group of dissenters that is no longer an organized flock? Pending a favorable outcome to the synod, progressive strategy will be to convince “faithful” dissenters that, despite the Holy Spirit’s (supposed) abandoning the Church for almost 2000 years, the light is shining out of the darkness and the now-acceptable virtues of obedience and respect for Church authority will have a new, correct and meaningful ecclesial reality.

But, a synod is not a council and a council is not a synod.  Canon Law for councils is found in Canons  338-341.  Separate and distinct cannons, Canons 342-348, govern synods. Canon 341 on councils deals with the “binding force” of an ecumenical council’s decrees confirmed or accepted by the Pope. Canon 343 on synods makes it clear that a synod has no authority and is “not to resolve [issues]or to issue decrees about them” (unless the Pope, after the synod concludes, in some way ratifies actions of a synod). Every bishop in the world  – “all and only the bishops who are members of the college of bishops” – are to take part in an ecumenical council (Canon 339).

For a synod, only certain, not all, bishops are members (Canon 344). Evidently the drafters of the Code of Canon Law saw synods as agencies of the papacy rather than as an authoritative microcosm of the college of bishops.

In short, a synod = the pope and the pope = a synod. Canon 344 lays out the total and supreme control the pope has over a synod, and this includes the synod this coming fall. Start to finish, top to bottom, the synod is “directly  under the authority of the Roman Pontiff;”  he convokes it, ratifies the election of members and/or designates members, determines topics for discussion, determines the agenda, presides over it, and concludes, transfers, suspends and dissolves it. It will be incorrect this fall, after the synod, no matter what it does, to say “The bishops of the Catholic Church said . . .”  A pope cannot use a synod as if it were an ecumenical council, as if it represented all the bishops of the world in agreement,  to validate and proclaim new doctrine or to make a valid infallible declaration of dogma.

Last week I heard in the priest’s homily a comforting, rosy picture of synods down through the ages and an encouraging depiction of faith-filled acceptance of synodal decrees by everyone. Nothing was said of the numerous synods which proclaimed and promulgated heresy, synods which were later corrected, and excoriated by popes and by ecumenical councils, many of which declared synodal decrees as heretical and issued anathemas of participating bishops.

Historically, heretical synods have failed, the gates of hell have not prevailed, and Holy Mother Church has endured. And so it will this Fall should anything contrary to church doctrine, any heresy, emanate from the synod.