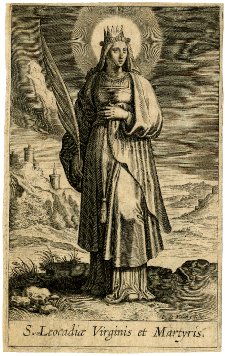 ST. LEOCADIA was a native of Toledo, and was apprehended by an order of Dacian, the cruel governor under Diocletian in 304. Hearing of the martyrdom of St. Eulalia, she prayed that God would not prolong her exile, but unite her speedily with her holy friend in His glory. Her prayer was heard, and she happily expired in prison.

Three famous churches in Toledo bear her name, and she is honored as principal patroness of that city. In one of those churches most of the councils of Toledo were held. Her relics were kept in that church with great respect, till, in the incursions of the Moors, they were conveyed to Oviedo, and some years afterward to the abbey of St. Guislain, near Mons in Hainault. They were finally carried back to Toledo with great pomp, and placed in the great church there on the 26th of April, 1589.

Reflection.—Were we not blinded by the world and the enchantment of its follies, the near prospect of eternity, the uncertainty of the hour of our death, and the repeated precepts of Christ would produce in us the same fervent dispositions which they did in the primitive Christians.