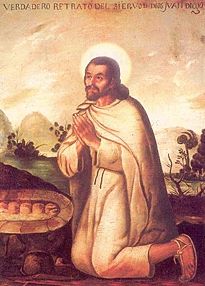 A farmer, landowner and weaver of mats, he witnessed the Spanish conquest of Mexico by Hernán Cortés in 1521, when he was 47 years old. Following the invasion, in 1524, the first 12 Franciscan missionaries arrived in what is now Mexico City.

Cuauhtlatoatzin and his wife welcomed the Franciscans in 1524 or 1525 and were among the first to be baptized — he taking the Christian name of Juan Diego; she, Maria Lucia. Later, they moved to Tolpetlac to be closer to Tenochtitlan (Mexico City) and the Catholic mission that had been set up by the Franciscan friars.

According to his legend, after hearing a sermon on the virtue of chastity, he and his wife reportedly decided to live chaste lives. This decision was later cited as a possible reason for which the Virgin Mary chose to appear to Juan Diego. In 1529, a few years after her baptism, Maria Lucia became sick and died. Juan Diego found the Virgin Mary when he was 57.[9]

As a widower, Juan Diego walked every Saturday and Sunday to church, and on cold mornings, wore a woven cloth called a tilma, or ayate made with coarse fibers from the maguey cactus for cotton was only used by the upper class Aztec.

On Saturday morning, December 9, 1531, he reported the following: As he was walking to church, he heard the sound of birds singing on Tepeyac hill and someone calling his name. He ran up the hill, and there saw a Lady, about fourteen years of age, resembling an Aztec princess in appearance, and surrounded by light. The Lady spoke to him in Nahuatl, his native tongue. She called him “Xocoyte,” her little son. He responded by calling her “Xocoyote,” his youngest child. The Lady asked Juan Diego to tell the bishop of Mexico, a Franciscan named Juan de Zumárraga, that she wanted a “teocalli,” a shrine, to be built on the spot where she stood, in her honor, where:

I will demonstrate, I will exhibit, I will give all my love, my compassion, my help and my protection to the people. I am your merciful mother, the merciful mother of all of you who live united in this land, and of all mankind, of all those who love me , of those who cry to me, of those who seek me, of those who have confidence in me. Here I will hear their weeping, their sorrow and will remedy and alleviate all their multiple sufferings, necessities and misfortunes.

Recognizing the Lady as the Virgin Mary, Juan Diego went to the bishop as instructed, but the Spanish bishop, Fray Juan de Zumárraga was doubtful and told Juan Diego he needed a sign. Juan Diego returned to Tepeyac hill and explained to the Lady that the bishop did not believe him. He implored the Lady to use another messenger, insisting he was not worthy. The Lady however insisted that it was of the utmost importance that it be Diego speaking to the bishop on her behalf. On Sunday, Juan Diego did as the Lady directed, but again the bishop asked for a sign. Later that day, the Lady promised Juan Diego she would give him a sign the following day.

He returned home that night to his uncle Juan Bernardino’s house, and discovered him seriously ill. The next morning, December 12, Juan Diego decided not to meet with the Lady, but to find a priest who could administer the last rites to his dying uncle. When he tried to skirt around Tepeyac hill, the Lady intercepted him, assured him his uncle would not die, and asked him to climb the hill and gather the flowers he found there. It was December, when normally nothing blooms in the cold. There, Diego’s miracle of the roses occurred: he found roses from the region of Castille in Spain, former home of bishop Zumárraga. The Lady re-arranged the roses carefully inside the folded tilma that Juan Diego wore and told him not to open it before anyone but the bishop. When Juan Diego unfolded his tilma before the Bishop roses cascaded from his tilma, and an icon of Our Lady of Guadalupe was miraculously impressed on the cloth, bringing the bishop to his knees.

Zumárraga acknowledged the miracle and within two weeks, ordered a shrine to be built where the Virgin Mary had appeared. The bishop then entrusted the image to Juan Diego, who chose to live, until his death at about the age of 73 — on May 30, 1548 — as a hermit near the spot where the Virgin Mary had appeared. From his hermitage he cared for the chapel and the first pilgrims who came to pray there, propagating the account of the apparitions in Mexico.

Impact on Mexico and the Catholic Church

According to the traditional account, the original image of Our lady of Guadalupe miraculously appeared on the cloak of Juan Diego, on the hill of Tepeyac near Mexico City on December 12, 1531.

News of the apparition on Tepayac Hill spread quickly through Mexico; and in the seven years that followed, 1532 through 1538, the Indian people accepted the Spaniards and 8 million people were converted to the Catholic faith.

According to Daniel Lynch, director of the Apostolate of the Missionary Image of Our Lady of Guadalupe, “An amazing thing happened. Indians became reconciled to Spaniards. And we had a new race of people. Mixed blood. We called them “Mestizos”. Our Lady of Guadalupe had appeared as a Mestiza. They call her the dark virgin, the little brown one.”

Our Lady of Guadalupe, as the Virgin Mary came to be known in this context, still underpins the faith of many Catholics in Mexico and the rest of Latin America, and she is recognized as patron saint of all the Americas.