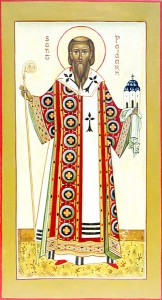 ST. PATERNUS was born at Poitiers, about the year 482. His father, Patranus, with the consent of his wife, went into Ireland, where he ended his days in holy solitude. Paternus, fired by his example, embraced a monastic life in the abbey of Marnes. After some time, burning with a desire of attaining to the perfection of Christian virtue, he passed over to Wales, and in Cardiganshire founded a monastery called Llan-patern-vaur, or the church of the great Paternus.

He made a visit to his father in Ireland, but being called back to his monastery of Marnes, he soon after retired with St. Scubilion, a monk of that house, and embraced an austere anchoretical life in the forests of Scicy, in the diocese of Coutances, in the west of France near the sea, having first obtained leave of the bishop and of the lord of the place. This desert, which was then of great extent, but which has been since gradually gained upon by the sea, was anciently in great request among the Druids. St. Paternus converted to the faith the idolaters of that and many neighboring parts, as far as Bayeux, and prevailed upon them to demolish a pagan temple in this desert, which was held in great veneration by the ancient Gauls. In his old age he was consecrated Bishop of Avranches by Germanus, Bishop of Rouen.

Some false brethren having created a division of opinion among the bishops of the province with respect to St. Paternus, he preferred retiring rather than to afford any ground for dissension, and, after governing his diocese for thirteen years, he withdrew to a solitude in France, and there ended his days about the year 550.

Reflection.—The greatest sacrifices imposed by the love of peace will appear as naught if we call to mind the example of Our Saviour, and remember His words, “Blessed are the peacemakers, for they shall be called the children of God.”