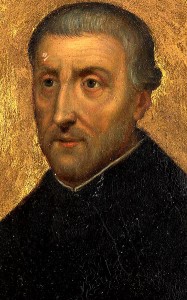 The founder of Protestantism broke from the Church in the same year in which Peter Canisius was born.  The year 1517 saw Martin Luther begin the work which led so many minds into error, but in God’s Providence it was the dawning in the life of the future Saint of a new era of battle against heresy.  The Netherlands was his birthplace, but every part of Europe felt his influence before he died.  His early education was not for the Church but, after making a vow of celibacy in 1540, he entered the Society of Jesus in 1543.  From the day of his solemn profession his whole life was dedicated to the service of the truth.

He opened many colleges, engaged in disputations, and won back many from heresy.  By his clear and forceful preaching he preserved the faith of many Catholics.  No class of society was excluded from his ministry; he explained the Catechism to children and heard their confessions with the same if not greater enthusiasm than which he showed their elders.  Poland Switzerland, Austria and Germany were the scenes of his activity, and though he met with opposition, he showed that the best work for the cause of truth is done when it is presented without ridicule or bitterness toward opponents.

He shown particularly as a writer, and he believed that the defense of the Church at home was as important as the conversion of the heathen.  His Catechism went to more than 200 editions in twelve languages during his own lifetime.

He died on November 21, 1597.  St. Aloysius Gonzaga attributed his own entrance into religion to Canisius’ influence.  He was canonized and made a Doctor of the church in 1925.