Trending Now
You are at:Home»Learn & Live the Faith»Vocations»St. Peter in Chains
By Dr. Robert Moynihan on May 11, 2011 Vocations 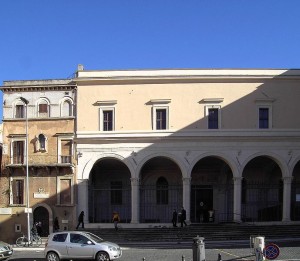 There are only three churches in Rome, as far as I know, dedicated to St. Peter: (1) the great St. Peter’s Basilica, at the heart of the Vatican and of the universal Church, where Peter is buried; (2) the tiny St. Peter in Montorio, just above Trastevere, where one tradition has it that St. Peter was crucified (though it seems more likely to me that St. Peter was crucified just next to St. Peter’s Basilica); and (3) St. Peter in Chains, where the chains which bound St. Peter when he was a prisoner in Jerusalem (the story is told in Acts 12:3-19) are preserved (see photo at end of article, which shows the chains as they are now displayed below the main altar of the basilica).

St. Peter was freed by a miracle, when an angel came to him in the night. 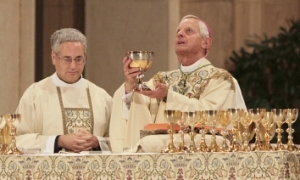 So, for an American cardinal to receive possession of such an important basilica, and one so closely related to the life and suffering of St. Peter, seemed worthy of note. Cardinal Donald Wuerl of Washington D.C. took possession of this third church dedicated to St. Peter, called San Pietro in Vincoli in Italian (St. Peter in Chains) at an 11 a.m. Mass Sunday, May 8.

It was an impressive, magnificent, solemn yet festive ceremony.

Wuerl moved with remarkable ease between English and Italian during his homily, which he preached in both languages, and after the ceremony, when he greeted well-wishers (many Americans in Rome never reach this level of fluent proficiency in the Italian language). 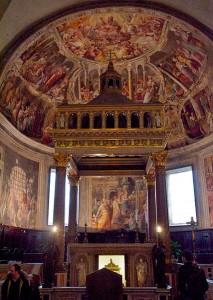 I was struck throughout the ceremony by Wuerl’s bearing. He seemed to sense that, by taking over this church — each cardinal is assigned a titular church in Rome — he is entering onto an entirely new level of responsibility and close collaboration with the Holy Father, Pope Benedict XVI.

The Mass was distinguished by gorgeous chant in Latin — some Gregorian, some modern — sung by the choir of the North American College in Rome. (The rector of the college, Msgr. James Checchio, was present — he should be rightly proud of his choir.)

The Basilica of St. Peter in Chains is also known for the enormous and very powerful statue of Moses, sculpted by Michelangelo in about 1545 — one of Michelangelo’s greatest works and one of the greatest treasures of western culture. 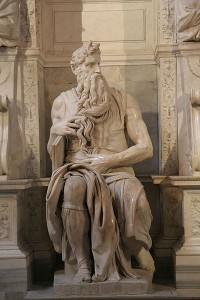 It is said that many Jews living in Rome came to this church in great numbers to venerate the statue when it was erected.

(The statue has horns on the head which seem to be the result of a misunderstanding in reading the scriptural text which speaks of Moses descending from Mt. Sinai after receiving the Law from God; the text says “a radiance shone about his face” but the Latin Vulgate uses a phrase which could be interpreted as saying that he had horns.)

Interestingly, this church also has a sarcophagus dedicated to the seven Maccabee brothers, who were Jewish heroes who died in a war to defend the Mosaic law against the hellenism which had begun to infiltrate Jewish faith and practice in the second century before Christ. (I do not know whether this sarcophagus, which dates to the 300s and was translated here by Pope Pelagius in the 500s (he reigned from 556-561), actually contains the mortal remains of the Maccabee brothers, which would be astonishing; but that it has been here for 1,500 years and is dedicated to them suggests the profound connection of this basilica with important events and themes relating to Judaism.)

St. Peter in Chains is also the resting place of the body of one of the greatest intellects in the history of Catholicism, the Renaissance cardinal Nicholas of Cusa. 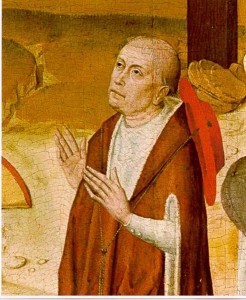 Nicholas was a profound philosopher and also a Church diplomat, and I would rank him as one of the greatest minds of the 1400s.

He was the titular cardinal of this church from 1449 to 1464 — precisely in the period when the Renaissance was beginning to come into its great flowering in Italy, and just at the time when western culture was about to experience the remarkable acceleration of the transmission of knowledge and ideas brought about by the printing press, invented by Gutenberg in 1453 — which was also the year Byzantium finally fell to the Turks, sending a flood of scholars and manuscripts from “New Rome” back to “Old Rome,” sparking and nourishing the “Renaissance.”

In this sense, St. Peter in Chains can be seen as one great center of intellectual activity, as Nicholas of Cusa was cardinal here precisely in those critical years.

Given this history, it is in a certain sense appropriate that Cardinal Wuerl, a learned man in his own right and a leading figure in catechesis and higher education in the Catholic Church in the United States — Wuerl is known for his catechetical and teaching ministry, and he is the Chancellor of the Catholic University of America, as well as being Chairman of the John Paul II Cultural Foundation, the Papal Foundation, and the US bishops’ Committee on Doctrine — should become the successor of Nicholas of Cusa in this spectacular and important basilica just a few yards from Rome’s Colosseum. (The president of another important American Catholic university located in Washington, John De Gioia of Georgetown, was in attendance at the Mass.)

The ceremony was solemn. A choir from Rome’s North American College — the college where many US bishops send their seminarians to study — filled the ancient basilica with magnificent Latin chant, some of it traditional Gregorian chant, some of it modern Latin chant: “Ecce Sacerdos Magnus” (“Behold the great priest”), “Vidi Aquam” (“I saw the water”), “Jubilate Deo” (“Shout joyfully to God”), a powerful “Gloria in exclesis Deo” (“Glory to God in the highest”), a simple, clear “Credo in unum Deum” (“I believe in one God”), and heart-felt renditions of the “Sanctus, sanctus, sanctus” (“Holy, holy, holy”), “Pater Noster” (“Our Father”), and “Agnus Dei” (“Lamb of God”), followed by a moving Communion hymn — “Ubi caritas et amor, ibi Deus est” (“Where there is charity and love, there God is”) — and a joyful recessional hymn — “Laudate Dominum, laudate Dominum omnes gentes, alleluia, alleluia” (“Praise the Lord, praise the Lord all peoples, alleluia, alleluia”).

Wuerl began the ceremony by kissing a crucifix — the sign for Christians of Christ’s innocent suffering and sacrificial death out of his love for all mankind and each one of us (I take the time to make this point because our society has evolved in such a secular way in recent decades that this obvious meaning is often unknown or forgotten today, which has, for example, complicated the recent European Union debate over the public display of the crucifix in Italy).

As he walked down the aisle to begin the Mass, Wuerl was smiling, nodding to the many well-wishers who had come from Pittsburgh and Washington to Rome for the occasion.

Don Bruno Giuliani, the Abbot General of the Canons Regular of the Lateran and the Rector of the Basilica of St. Peter in Chains greeted Wuerl. (Though Wuerl now is officially the “possessor” of St. Peter in Chains, and so has authority offer the church, Giuliani will continue to administer the basilica’s day-to-day affairs, as the American cardinal will of course spend most of his time in Washington.)

I spoke for some time with Giuliani after the ceremony. Giuliani, who spent 40 years in Brazil as a missionary.

All cardinals of the Catholic Church are given titles to churches in Rome to symbolize their roles as collaborators with the Pope and to establish the seat of their authority in the diocese of Rome.

A Note on the Freeing of St. Peter 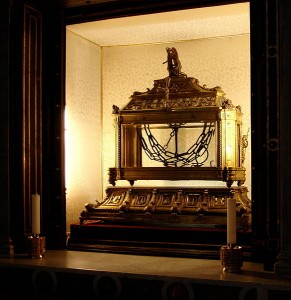 The Liberation of St. Peter is a story told in the Acts of the Apostles in which St. Peter is rescued from prison by an angel.

Acts 12:3–19 tells how Peter was put into prison by King Herod, but the night before his trial an angel appeared to him, and told him to leave. Peter’s chains fell off, and he followed the angel out of prison, thinking it was a vision (verse 9). The prison doors opened of their own accord, and the angel led Peter into the city.

When the angel suddenly left him, Peter came to himself and returned to the house of Mary, the mother of John Mark. A servant girl called Rhoda came to answer the door, and when she heard Peter’s voice she was so overjoyed that she rushed to tell the others, and forgot to open the door for Peter (verse 14). Eventually Peter is let in and describes “how the Lord had brought him out of prison” (verse 17). When his escape is discovered, Herod orders the guards put to death (verse 19).