Trending Now
You are at:Home»Featured»Stubborn Donna
By George Galloway on May 26, 2014 Featured, Live in Christ, Vocations 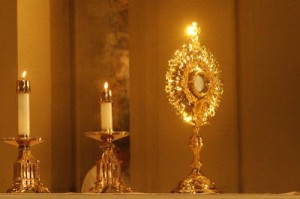 Donna Russell just sat there on the bench being what she was: a twelve-year-old child and as stubborn as a mule. Helen, her sister, sat beside her. They both refused to look at me. I was furious. It was late in the game and we were down ten points. This was my first year coaching for the CYO girls’ junior varsity basketball team.

My two stars, Donna and Helen, were having a sit-in right when I needed them the most. For some reason, they were upset with the referee and their juvenile, hormonally-charged snit fit told them it was okay to ride the bench rather than accept the judgment of the basketball god in the striped shirt.

I didn’t know it then, but Donna’s childish stubbornness would stay with her for many years to come, change the lives of people on three continents, possibly save our Eucharistic Chapel (our precious Ephphatha Center), and the “Field of Life.”

“Ephphatha” in ancient Greek (Aramaic origin) means to “be opened.” Donna was fourteen in the late seventies and opened to a world full of confusion and noise. Pope John Paul II, now proclaimed a saint, was visiting Philadelphia for the world-wide Eucharistic Congress along with Mother Teresa of Calcutta. Donna was moved after seeing them. Moved so much she felt a calling in her heart to a religious vocation. But she was stubborn.

Donna ran. She whisked the gentle, vocational tug on her heart under the shaggy rug of adolescent obscurity with its constant noise that celebrates self-love. To be called to service can be a frightening, overwhelming message in a world obsessed with self-fulfilling desires.

Much in our society, especially among the young, demands complete obedience to the culture of self. Self-giving is okay when it comes to popular causes; but not when it involves giving of oneself to the unthinkable: that there is a God and He loves us unconditionally.

Donna ran for many years from the calling in her heart. When she moved back home after working and pursuing the unfulfilled dreams of this world, her parents insisted she go to church once again. She accepted, but only after subduing a rebellious and skeptical intellect. Her heart had gone dry, as is the case with all of us who pursue worldly aspirations and end up thirsting.

One day her mother, Betty, asked her to help her at the Ephphatha Center. Reluctantly, Donna agreed. She would help her mother clean and tidy up the place, but she would not enter into the room dedicated to Perpetual Adoration. She no longer believed in the Eucharist as the very Presence of Christ on earth. Instead, she would vacuum, sweep the floors, and clean the bathroom.

But, slowly, she began to feel a sense of immense peace. Every time she volunteered to work at the center, Donna felt an awesome tranquility. She remembered the calling to serve from her stubborn childhood; then a quiet urgency within her very being.

Donna was working late nights. Her shift would end at one o’clock in the morning. A silent voice beckoned her to visit the Ephphata Center at that strange hour. She would finally come before the Presence, but not with formal prayer. She asked only one thing: to be given a straight answer to a straight question – what, Lord, do you want of me?

This went on for two months. After many tears, after talking to Our Lord face-to-face, like a friend, like a brother, yelling at Him, entreating Him, arguing with Him, learning to trust Him like a confidant, she received an answer. She had learned to be herself in front of Him – who she really was, not what she projected to the world. She was given the gift of intimacy. Donna now realized she was meant to enter into religious service. Why? What had happened to her in our little chapel that caused her to make such a dramatic change in her life? 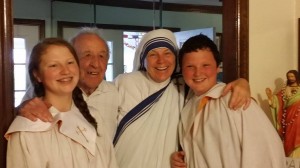 Sr. Marise Therese via Save the Field of Life

“Peace,” she said. “An incredible sense of peace that made me feel like a child again. That gave me the freedom to be a child, because only those who become a child can enter into the kingdom.” Donna returned to the sacraments and found her way back to the church after years of searching. When she entered the order of the Sisters of the Missionaries of Charity, she took the name of Marise Therese in honor of the Blessed Virgin and Mother Teresa of Calcutta.

She served in the United States, in New York and San Francisco, and then in Rome for four glorious years, before her current assignment in Rwanda, in Africa. Now, Donna is a Superior of her order, working, loving, praying – happy to be free, serving her chosen husband in a far-away land that is far only in terms of miles. Her heart is still very close to her mother and father, family and friends in Levittown, Pennsylvania. And her journey started here: at the place named “be opened.”

Outside of the Ephphatha Center, there is a plaque. It reads: “In loving memory of all babies who due to abortion will never visit this chapel or run and play on this field.” And now the chapel is being sold. The church is to be closed and the parish of St. Joseph the Worker consolidated.  But, not without a fight.

We have a petition to Archbishop Chaput, of Philadelphia, to postpone the sale until other options can be found. We’re not trying to stop the consolidation of the parish, we recognize the times for what they are. We’re just trying to save the chapel and the “Field of Life.” This is a place of small miracles – for a stubborn young girl who finally decided to stop riding the bench and for us all.

“There is great turmoil in the world today, yes?” Donna asked and answered at the same time. “It’s important for the chapel to stay opened because people need the true peace that can only be found there.”