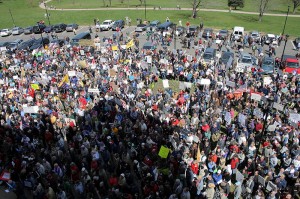 The Thomas More Law Center announced [Wednesday] that it has filed a federal lawsuit in the U.S. District Court for the Western District of Michigan against the City of Coldwater on behalf of the Common Sense Patriots of Branch County and two of its members, Barbara Brady and Martin Lepper, alleging that the City’s recent ban of all signs in the Four Corners Parks violates their constitutional right to Free Speech.

The Common Sense Patriots was established in 2009 as part of the nationwide political, grass-roots movement of American patriots known as the TEA Party.  They were motivated by the concern that the government was trampling on fundamental liberties.  The Thomas More Law Center (TMLC) is a national conservative Christian public interest law firm based in Ann Arbor, Michigan.

Richard Thompson, President and Chief Counsel for TMLC, commented, “The right to freedom of speech is one of our most fundamental constitutional rights and the City of Coldwater is trampling all over that right with this draconian sign restriction.”

That new policy, which was passed by the City Council this past November, forbids “the display of banners or other signs of any type or description whatsoever in the Four Corners Parks in the City of Coldwater.”

The Common Sense Patriots gather several times each year for “TEA parties, ” which they would often hold at the Four Corners Park.  These political assemblies and rallies would invariably involve the display of numerous political signs and banners with slogans such as “No More Taxes, ” “Give Me Liberty . . . Not Debt, ” and “Born Free . . . Taxed to Death.”

As it had with other groups in the past, the City allowed the Patriots to place a sign at the park entrance announcing their meetings.  Last July that suddenly changed.  Without giving any specific explanation other than the City had received some complaints, the City Manager informed the Patriots they could no longer put up their sign.

TMLC stepped in on behalf of the Patriots and sent a letter to the City Manager demanding that he reverse his position.  Within a few hours of receiving the letter, he did, and the sign was posted.  However, in his response, the City Manager indicated that “a formal policy on displays in the city parks will soon be forthcoming.”

The lawsuit alleges that the City’s new sign restriction burdens substantially more speech than is necessary to further the City’s interests; that it is not narrowly tailored to serve a significant government interest; and that it does not leave open ample channels of communication for the Patriots to meaningfully and effectively express their political message in direct violation of the Free Speech Clause of the First Amendment.

Robert Muise, TMLC’s Senior Trial Counsel who is handling the case, stated, “The U.S. Supreme Court has made clear that when the government seeks to regulate speech, particularly speech within a traditional public forum such as a city park, it must do so with precision.  Broad prophylactic restrictions on speech such as the City’s sign restriction cannot withstand the heightened scrutiny called for under our Constitution.”