Trending Now
You are at:Home»Featured»Tear Down This Wall: Celebrating Victories Over Communism on World Freedom Day
By Alejandro A. Chafuen on November 8, 2013 Featured, Government & Politics, International Issues, Law & Justice 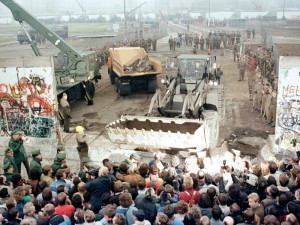 Saturday, Nov. 9, marks the 24th anniversary of the fall of the Berlin Wall. It is an important date in the history of human civilization. President Ronald Reagan’s demand, “President Gorbachev, tear down this wall,” constitute some of the most memorable words spoken in the last century. Reagan and Mikhail Gorbachev were not the only two actors in this human drama. Many died confronting Soviet expansionism in the Southern cone of the Americas, in Angola, Afghanistan, and other corners of the globe.

A political leader and a think tank scholar deserve major credit for highlighting the importance of this date.

José María Aznar, former prime minister of Spain, has always been committed to freedom. Several years prior to his 1996 election, he created a think tank, FAES, to help disseminate the ideas of liberty.

Aznar had been so helpful with efforts around the globe that in early 2004 I asked a member of his team, Alberto Carnero, former national security advisor and current ambassador in Austria, if Aznar had a favorite issue that I could help support. Carnero told me, “He would like to celebrate with more emphasis the victories over communism, especially Nov. 9.” A few months after, another Spanish think tank leader, Vicente Boceta, past executive director of the Business Roundtable of Madrid (Circulo de Empresarios de Madrid), contacted me with the same goal. He was not aware of Aznar’s request.

Neither of my Spanish friends knew that they were preceded by Arnold Beichman, an admirable scholar who, like other luminaries, was working at the Hoover Institution. He was 85 years old during those liberating days of 1989. A native of Ukraine, and longtime educator and activist against communism, Beichman successfully encouraged President George W. Bush to proclaim Nov. 9 as World Freedom Day. Beichman was very active among think tanks. He was one of the founders of the Consortium for the Study of Intelligence, in Washington D.C. (with, among others, Antonin Scalia, Samuel Huntington, James Q. Wilson, and Bob Pfaltzgraff) and the former vice president of the Philadelphia Society.

Like my friends above, there are many worthy players who confronted the evils of communism that deserve to be recognized, but there is also a utilitarian argument for commemorating World Freedom Day. As George Santayana wrote, “those who cannot remember the past are condemned to repeat it.” Today, many young Germans do not have a vivid recollection of those last days of communism.

In addition to remembering those who contributed to the weakening of the Soviet Union and helped to strengthen the free society, Nov. 9 is an ideal day to take stock. One of the first measurements of freedom, developed by Freedom House in 1973, has focused on political aspects of freedom. At the time of the fall of the Berlin Wall, Freedom House listed 68 countries that lacked democratic freedom; today we are down to 47. Measurements of economic freedom began just after 1989.

Ronald Reagan’s statement that, “freedom is never more than one generation away from extinction,” is clearly a call to action. The fight for freedom needs to go beyond economics. On the field of research, LIBRE, a budding think tank in Argentina, is seeking support to compile a “Black Book of Terrorism” to complement the influential 1999 Harvard University Press book “The Black Book of Communism,” a multi-author work that listed 100 million (dead) victims of communism. Organizations such as The Victims of Communism Memorial Foundation (run by Lee Edwards), which focuses on remembering the victims, and The Human Rights Foundation which defends current victims of totalitarian governments, also deserve strong support.

Nov. 9 is not all about the past. North Korea and Cuba are still under the grip of communism. The citizens of many other countries, especially those with rulers trying to implement 21st century socialism and other totalitarian models, are also longing to celebrate their own freedom day. Thanks to the encouragement of President Aznar and the late Arnold Beichman, think tanks across the globe keep this day in their agenda. More than that, by continuing to document, advocate, and defend the treasure of liberty, they make a positive contribution to civilized life.