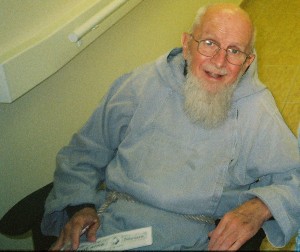 He was a pro-life champion.

He was a great supporter of EWTN and Mother Angelica.

He was a huge booster for Franciscan University.

He was a tireless therapist/spiritual director/advocate for priests in trouble.

He was a lighthouse for fidelity and truth in the faith during the tumultuous 60’s and 70’s.

He was co-founder of Good Counsel Homes.

He was an early and active participant in the Charismatic Renewal.

He was a celebrated author with dozens and dozens of books, tapes, and DVD’s.

He was a co-founder of a reform religious community.

He was a Columbia University educated psychologist.

He was a seminary professor for over 40 years.

He was a spiritual director and sage who was very good to women’s communities.

He was an advisor to bishops from all over the world.

He was an international lecturer.

He was a retreat master without equal.

He walked with Saints John Paul II and Theresa of Calcutta.

He was a television host who boosted countless ministries on his show.

He was a good friend to and mighty advocate for the poor and the least among us.

Father Benedict Groeschel was my professor when I was in the seminary in the late 1980’s. He taught us ascetical theology and gave us spiritual direction on retreat. His classes were in themselves mini-retreats, whose content I have spent a lifetime unpacking.

When I left the seminary and told him that I was pursuing biomedical research, and that Columbia University’s post-baccalaureate pre-medical studies was my first step toward the Ph.D. he was delighted that I would be attending his alma mater. I continued to see him every now and then when I hit bumps in the road in the spiritual life.

Several years later, when I finished the Ph.D., I drove up to Trinity Retreat House to have lunch with Fr. Benedict and talk about the uncertainties ahead, as well as our son Joseph’s newly diagnosed autism and my deep, deep fears around that whole issue. I was a burnt out mess.

Fr. Benedict came across the room to me with outstretched arms and congratulated me. He then shared that when he finished his doctorate he breathed a sigh of relief because he never had to write another paper again. When he said this I pulled back with an incredulous look, to which he inquired why. I said, “You’re kidding, right?” And he said, “No, why?” I responded that he went on to author 5,000 books!

Fr. Benedict just smiled with the knowing twinkle in his eyes. We went in to lunch, and then I spent two hours pouring out my fears for Joseph, my doubts about my capabilities, and how utterly alone I felt, sensing the absence of God.

My old mentor took me through whence I had come spiritually, and then led me through the Dark Night of the Soul. When I was leaving, we exited his room, which opened into his secretary’s office. Fr. Benedict has shelves filled with the books he authored. It was the stock room, in a sense, for the books people purchased online and via mail order. He grabbed a copy of Stumbling Blocks and Stepping Stones, as well as Spiritual Passages and handed them to me. When I said, “Thanks, but I have them at home,” he said in reply, “Take two more!”

He was truly one of a kind. A session with Fr. Benedict could range from side-splitting laughter to dealing with being on the edge of the abyss. Whenever I saw him, he always asked for Regina, and then each of the children by name. He was gracious, and holy. His brilliance and incisiveness could easily be overpowering, had he not tempered them with his quick wit and self-deprecating humor.

When I began doing pro-life work in earnest, Fr. Benedict was there with wisdom beyond description. He mapped out all of the spiritual pitfalls I faced, and helped me avoid them all.

I could tell a number of other stories about Fr. Benedict, and what he did for elderly priests who needed the guidance and support to take them the rest of the way home, of how he was never too busy, never said no. But we’ll let those stories rest with all of those good men who found their way with Fr. Benedict’s guidance.

What will endure, more than anything, was the one great constant in all of our conversations: Fr. Benedict’s love for the poor and the least, his admonition to me that I never forget them and their needs, that they are the living face of Jesus.

A priest who met popes, walked with saints, advised the bishops and cardinals of the Church, and yet craved time with the lowliest in society, because that’s where he felt closest to his God.

I should feel some sorrow at his passing from us, but I can’t. Though I’ll miss him, I’m overjoyed that he now sees face-to-face the God he could only see tangentially as he walked among us.

Yes, I believe that Fr. Benedict went to Purgatory (as he insisted he would), but only to collect a few souls along the way home.

Thank you, Fr. Benedict Joseph, and please pray for us.