Trending Now
You are at:Home»Columnists»That Was Then. This Is….Gross.
By Karen J Rinehart on November 13, 2011 Columnists, Featured, Humor 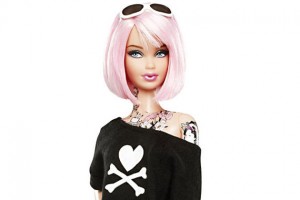 If her unrealistic body proportions weren’t enough of a controversy and reason for parental and feminist outrage, now Barbie has tattoos.

Hang on–before you think Tattoo Barbie is going to be your daughter’s Must Have or Die Christmas Gift, don’t. Only 7,400 dolls were made and they’ve already been swooped up by “collectors”.  And by “collectors”,  I imagine  (1) People with a spare fifty bucks for an inked plastic toy, (2) Boomer Women reliving the nostalgic fervor of their youth, (3) Those wanting to attend the next Barbie Conference clutching their tattooed toy and saying to 300,000 other attendees, “Nah nah nah boo boo I got one and you didn’t!” or (4) E-bayites looking to make a killing selling them to desperate parents whose daughter named Tattoo Barbie as her Must Have or Die Christmas Gift. 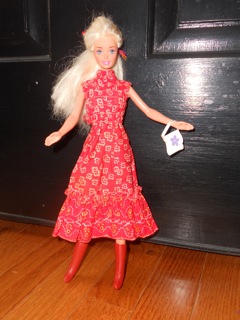 Unlike her 2009 predecessor, Totally Stylin’ Tattoo Barbie, which was pulled from store shelves due to complaints, Tattoo Barbie doesn’t come with removable “tattoo” stickers. This Ink, which spreads down from her neck, across her chest and collarbone includes flowers, crowns and unidentifiable swirls (snake?) in pink, white and black, plus a geisha woman on her left shoulder, is permanent. Like real tattoos on real people. (Maybe a good thing?)

I wonder if ol’ Tatts Barbie and Bastardino hang out with Silkstone Lingerie Barbie.  And does she have a pet too–maybe Skanky Skunk? I do know she (Barbie, not her skunk) wears a black bra, panties and thigh high stockings held up with garter belts.  Oh, and her arms and legs are secured to her box with black ties….

Can you imagine the pajama parties those three (Can’t leave Bastardino home in his crate!) would have with Barbie Video Girl? She has a “hidden” video camera in her (exposed) cleavage and comes with special optional downloadable “editing software”. Mattel says she’s appropriate for “ages 6+” but I sure as hell wouldn’t let my Skipper attend THAT party.

I can only hope it’s Dermatologist Barbie who charitably donates her time to laser off tattoos from Out On Probation Gang Banger Barbies who want to get back into Ken’s good graces.

But a girl can still dream. Or can she?