Trending Now
You are at:Home»Featured»The Arab Spring is Not Your (Founding) Father’s Democracy
By Raymond Ibrahim on October 31, 2011 Featured, Government & Politics 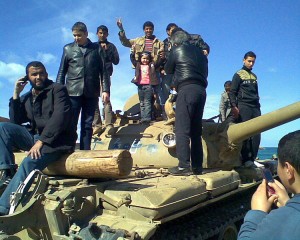 What a myopic view the Western media and its array of “experts” have concerning the so-called “Arab Spring” — a myopia that naturally metastasizes among the general public.

Consider the Libyan crisis. As usual, the focus is entirely on the individual, on the tangible — the now dead Gaddafi — whom all the blame can be heaped upon, while the existentialist elephant in the room, the real mover and shaker, the spirit of the age behind all these uprisings, is never acknowledged.

So another Arab dictator has been eliminated, and the talking heads are abuzz: some, whose knowledge of the world and reality is chronically limited to their own experience, naively cry “democracy!” (even as those who butchered Gaddafi were crying “Allahu Akbar!”); others cautiously include the usual boilerplate caveats in their analyses, which otherwise remain parochial.

Either way, as many interpret events in Libya, they project their own values and notions of right and wrong, good and bad — most notably by portraying the Arab uprisings as positive signs of democracy — thereby demonstrating, yet again, their inability to comprehend Islam’s distinct civilization, let alone the Closing of the Muslim Mind.

I am reminded of an especially pertinent observation by philosopher Arthur Schopenhauer:

The discovery of truth is prevented most effectively, not by the false appearance things present and which mislead into error, nor directly by weakness of the reasoning powers, but by preconceived opinion, by prejudice [in this case, by the Western conviction that all people want a secular, liberal democracy], which as a pseudo a priori stands in the path of truth and is then like a contrary wind driving a ship away from land, so that sail and rudder [reality and those who present it]labor in vain.

Indeed, 19th century Germans, such as Hegel, understood that world events, far from being inextricably tied to individual leaders, were products of the Zeitgeist, defined as: “The spirit of the time; the taste and outlook characteristic of a period or generation … the spirit, attitude, or general outlook of a specific time or period … the general atmosphere of a place or situation and the effect that it has on people.”

Consider Libya’s neighbor, Egypt, as described in the 2009 book Inside Egypt. The author’s otherwise prescient argument was that revolution was in the air; however, he too took the narrow view, ignoring the “spirit of the time.” My review of the book, written before the Egyptian revolution, is especially applicable today:

Unfortunately, there is a myopic tendency to view nearly every problem in Egypt as a byproduct of Husni Mubarak, Egypt’s president since 1981, and in [the author]Bradley’s view, the “most corrupt offender of them all.” Even things one might have supposed were products of time or chance — from the condition of Egypt’s Bedouin, who have led the same desperate lifestyle for centuries, to the radicalization of Muslims, a worldwide phenomenon—are somehow traced back to Mubarak. … Indeed, this is the book’s chief problem. Bradley is convinced that, given a chance, through the elimination of Mubarak, Egyptians would create a liberal, egalitarian, and gender-neutral society. … And while he is convinced that Egypt is a byproduct of Mubarak, one is left wondering instead whether Mubarak is a byproduct of Egypt.

In fact, since the Mubarak scapegoat has been ousted, and after Western media and politicians gushed and hailed “democracy,” Egypt has seen the worst Islamist inspired violence — especially from the state itself — against its non-Muslim minorities.

The lesson? To understand grand scale events, stop focusing on individuals — whether ousted Arab dictators (Tunisia’s ben Ali, Egypt’s Mubarak, now Libya’s Gaddafi) or slain jihadist leaders (Osama bin Laden and the various no-names the administration boasts of killing) — and start focusing on the forces, the “spirit of the time,” in this case, Islam, which creates bin Ladens no less than the tyrannical autocrats who suppress them.

Nor is this approach limited to comprehending the significance of the “Arab Spring.” To the many who think that America’s problems begin and end with Obama, consider the logic of the following quote, attributed to a Czech newspaper:

The danger to America is not Barack Obama but a citizenry capable of entrusting an inexperienced man like him with the presidency. It will be far easier to limit and undo the follies of an Obama presidency than to restore the necessary common sense and good judgment to a depraved electorate willing to have such a man for their president. The problem is much deeper and far more serious than Mr. Obama, who is a mere symptom of what ails America. Blaming the prince of the fools should not blind anyone to the vast confederacy of fools that made him their prince. The republic can survive a Barack Obama. It is less likely to survive a multitude of fools such as those who made him their president.

In short, individual leaders do not cause societies to become what they are; rather, these leaders are symptoms — reflections — of their respective societies.