Trending Now
You are at:Home»Featured»The Beatification of Pope John Paul II: When the Wall Fell
By Fr. Gordon J. MacRae on April 27, 2011 Featured, On Media 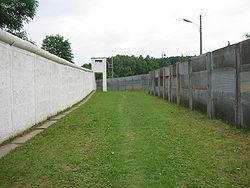 There have been 265 popes in the life of the Church. Eighty-one of them are saints. On May 1, Divine Mercy Sunday, God willing, Pope Benedict XVI will take a major step toward adding his predecessor to that number by declaring him blessed.

On March 30th, the History Channel broadcast a two-hour program entitled, “Secret Access: The Vatican.” I was expecting something really slanted, so I tuned in ready to tune out at any moment. It turned out to be the fastest two hours I’ve ever spent in front of a TV screen. It was respectfully presented, and filled with intriguing historical facts including some very moving interviews with Vatican staff. The presentation wasn’t at all free of scandal, but all the scandal was in a historical context.

As I described in “Michelangelo and the Hand of God,” the scandals of today are paltry next to some of what went on during the papal reigns of the 16th century Renaissance, and the History Channel production gave them ample treatment without prejudice.

It’s easy, but not at all fair, for critics to point to scandals in the Church during the papacy of Pope John Paul II as a reason to slow or even curtail his planned beatification. Some of the comments defy logic. Much of the agenda of retelling the post mortem Father Maciel scandal has been an attempt to cast a shadow on the late Pope John Paul II through guilt by association. With such logic, President Barack Obama should not be re-elected because school districts receive federal funds, and many, MANY public school teachers have been accused of abuse  “during his watch,” as the pundits are fond of throwing at the Pope.

I am far more interested in Pope John Paul’s place in history, and in that context he was — and is — a giant.  His entire life was lived against the backdrop of Communism and its push to dominate not only the world’s mind, but its soul.

In my mind, a decade of radical social change began with the 1963 assassination of President John F. Kennedy, and ended with the divided 1973 Supreme Court decision in Roe v. Wade. The years in between saw the rise and fall of a tragic American war in Vietnam, the assassinations of Robert Kennedy and Martin Luther King, the decline of respect in the U.S. Presidency after Watergate, and, for Catholics at least, the sometimes traumatic liturgical and other reforms of the Second Vatican Council.

Being American and being Catholic felt vastly different in 1973 than they did in 1963. Former Newsweek editor, Kenneth L. Woodward has a terrific article describing this in First Things, (“Memories of a Catholic Boyhood,” April 2011).

A few years before that decade of change, I began first grade at Ingalls Elementary School in Lynn, Massachusetts; I was but five years old, a full year younger than most of my class. I wasn’t usually the first to catch on to subtle social and political cues.

So in 1961 when Mrs. Eisenberger decided to stage a mock United Nations General Assembly with her third grade class, I was just a clueless seven-year-old. All hands shot up when she tried to pick the U.S. delegate, so she did it all by lottery. She put thirty nations on slips of paper in a basket, and we drew them one by one.

It was just my luck. I looked up from my little slip of paper and asked, “What’s U.S.S.R.?” You could have heard a pin drop. That night at dinner, my older brother (then age nine) whispered, “Communist!” as I told my parents I was to represent the U.S.S.R. in the school assembly. “WHAT?!” my father shouted. “You’ll do no such thing!” declared my mother. It was as though I had just announced my intent to defect behind the Iron Curtain.

There I was, seven-year-old Ivan the Terrible, about to experience the meaning of the Cold War as succeeding days of kickball selection left me standing alone on the sidelines at recess. I was blacklisted at the age of seven! “And what is this new nickname about?” I wondered.  “Who’s ‘Nikita?’

My father filled in all the blanks. A serious consumer of the news — especially Walter Cronkite’s presentation of it — he gave me a fast education on the rise of Communism after World War II, the expansion of Russia into neighboring states and the formation of the Union of Soviet Socialist Republics, the tyranny of Nikita Khrushchev, who just a year later would terrify Americans with a threat of nuclear annihilation during the eight days of the Cuban Missile Crisis. My father told me that the Soviet Union was an “Evil Empire” two decades before a new president, Ronald Reagan, drew a line in the sand with those very same words.

So at the mock U.N. Assembly, I boldly began with a disclaimer that my father helped me craft. “I represent this Evil Empire under duress!” The class gasped, but Mrs. Eisenberger smiled. By the next day, thanks to my father, I was no longer a Soviet defector. I was now the third grade’s Soviet expert, called upon to explain the necessity of drills during which we hid under our desks because the nearby General Electric plant’s jet engine unit was a potential nuclear target. We had learned the terror of the Cold War.

So you might understand the immense pride I felt 48 years later when I read The Wall Street Journal’s lead editorial marking the 20th anniversary of the fall of the Berlin Wall (“Why the Berlin Wall Fell,” Nov. 9, 2009). The world’s largest newspaper attributed the collapse of Communism and the  Soviet Union, and the fall of the Berlin Wall, to three people: Mikhail Gorbachev, Ronald Reagan, and Pope John Paul II “who did so much to expose the moral bankruptcy of communism.”

And the WSJ wasn’t alone in that assessment. A gripping documentary produced by Newt and Callista Gingrich last year — Nine Days that Changed the World — recounts how Pope John Paul II sparked a revolution in his native Poland that led directly to the fall of the Soviet Empire.

The first non-Italian Pope since 1523, Pope John Paul II announced a year into his papacy his plan to travel to his native Poland in June, 1979.  The Soviet Politburo was horrified. He was the one religious leader who could unify Poland against its Soviet occupiers, and that is exactly what he did. A third of the country turned out to witness the event first-hand. Time magazine described it then:

“Returning to his homeland for the first time since he was chosen Pope last October, Karol Wotyla, John Paul II, stirred an outpouring of trust and affection that no political leader in today’s world could hope to inspire, let alone command.”

For the Soviets, this one man was the world’s greatest threat to the Communist agenda. Less than two years later, on May 13, 1981, Pope John Paul II was shot four times at point blank range by Mehmet Ali Agca, a 23-year-old Turkish prison escapee, in St. Peter’s Square. The attack would have killed lesser men, but this Pope survived.

In 2002, Tom Clancy wrote Red Rabbit (G.P. Putnam). In the story, Clancy’s famous protagonist, CIA analyst Jack Ryan caught wind of a plot to kill Pope John Paul II in 1981, and pursued all the leads. The story had the Soviet Politburo aghast at the Holy Father’s intent to travel to Poland again to support the Solidarity movement, and they simply couldn’t allow this to happen.

In Tom Clancy’s account, the Politburo in secret meeting gave a nod to the “Komitet gosudarstvennoy bezopasnosti” — the Committee of State Security, or “KGB” — to devise a plan to rid the world of this Pope. The KGB, fearing political reprisals from the Western world, especially the Reagan administration, decided to farm the mission out to the Bulgarian secret police who in turn hired a Turkish mercenary to shoot the Pope in St. Peter’s Square.

Reviewers laughed. Some of the comments at the time painted Tom Clancy’s plot as “classic conspiracy theory” and a “Catholic paranoid rant.” But as so often happens with Tom Clancy, his eerie historical prescience was right on target. In 2010, files from the East German secret service confirmed that the KGB ordered the attack on the Pope and carried out the entire plot just as Tom Clancy had described. The KGB recruited the Bulgarian secret police, who in turn hired Mehmet Ali Agca, who was kept in the dark about the KGB pulling his strings.

In its June 2010 issue, NewsMax magazine published a review of the Newt Gingrich film, “Nine Days that Changed the World” (Ronald Kessler, “The Pope Who Defeated an Evil Empire“).  NewsMax reported that the Gingrich film was inspired in part by George Weigel’s book, The Final Revolution: The Resistance Church and the Collapse of Communism.  For anyone who doubts the relevance of the Roman Catholic Church and papacy in the modern world, this book, and Newt Gingrich’s documentary, will divest you of that erroneous view.

Is Pope John Paul II to be the Church’s 82nd papal saint? The Church will soon determine that. From my far more limited perspective, however, history has already shown that he was a pivotal figure in world affairs, and an instrument of God. There could be no other explanation for the vastness of his influence in the modern world.

In his 1948 book, The Gathering Storm, Winston Churchill wrote of a 1935 proposal to Soviet Premier Joseph Stalin suggesting that the Soviet Union should not suppress Catholicism, but should rather encourage it in order to gain favor with the Pope.  Stalin famously responded, “The Pope? How many divisions has he got?”

Ironically, that conversation took place on May 13, 1935, forty-six years to the day before the Soviet Union tried to kill Pope John Paul II because he was the most feared man in all of Europe.  The Pope survived.  Stalin’s successors in the Soviet Union learned the answer to his question far too late for their own survival.

Karol Wojtyla has earned the place in history summarized by the title given to him by Father Richard John Neuhaus and other admirers. He helped rid the world of Satan’s most earthly Evil Empire. Without doubt, he was — and is — Pope John Paul the Great.