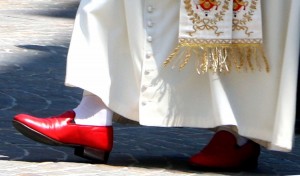 The U.S. edition of the men’s style and lifestyle magazine Esquire recently named Pope Francis as its Best Dressed Man of 2013. The magazine explained that the decision was “unconventional,” but insisted that the way that the pope dresses has “signaled a new era (and for many, renewed hope) for the Catholic Church.”

Mark-Evan Blackman, an assistant professor of menswear design at the Fashion Institute of Technology, was quoted as saying that the new pope’s  “mode of dressing really does reflect the mindset behind it. I remember when John Paul II was buried in those opulent bright red shoes. When the current pope was elected and chose not to wear the red shoes I thought that was very reflective of his approach to being a person functioning in a role.”

Mary Lisa Gavenas, author of The Fairchild Encyclopedia of Menswear, also commented on the award saying: “Pope Francis understands that menswear is meant to express the character of the man wearing the clothes. No rapper-style popewear for him.”

Apparently what inspires the Esquire staff, Ms. Gavenas, and Professor Blackman is that Pope Francis does not wear the red shoes that both Pope Benedict XVI and Pope John Paul II wore, and the red cape (mozetta) that they, and many, many popes before them wore on various formal occasions. This seems to be important to them. Hm.

Actually, Pope John Paul II may have been buried in embroidered red slippers, but he did not wear slippers around the world. He wore fairly plain shoes for most of his papacy. Similarly, the shoes that Pope Emeritus Benedict usually wears and that are so offensive to Professor Blackman are not all that ostentatious. Just red loafers made by an Italian cobbler named Adriano Stefanelli. And note: John Paul or Benedict didn’t always wear the mozetta. It was a sign of authority worn on official occasions.

Actually, the papal fashion watchers around the world might suffer a break down if they knew that the current pope’s award winning white cassock and accompanying cape weren’t bought off the ready to wear pope rack at the nearest Dollar Store, and cost real money. They may be horrified if they knew that Pope Francis wears a big and expensive one-of-a-kind ring, a very expensive one-of-a-kind garment made out of top grade lambs wool known as a papal pallium, a number of very expensive hats called mitres, a variety of even more expensive poncho like garments called chasubles, and that he carries a very expensive metal walking stick called a ferula. He also wears a red and gold embroidered stole just as Popes John Paul and Benedict and their predecessors did. Oh dear!

But what is really on the minds of the Esquire staff when it picks the new pontiff of the Catholic Church to be its best dressed man of the year because he wears a white soutane, with a white cape? Even calling a while cassock and matching cape “menswear” is pretty wild. Heretofore, the frequent comment from much of the secular press, as well as the non-religious and anti-Catholics of the blogosphere, was that popes dressed like transvestites or had great Halloween costumes. Actually, I suspect that the Esquire award has not much to do with the pope’s attire at all.

Admittedly Esquire is not GQ Magazine, but if you want to get an idea of what is going on consider that only weeks before Esquire named Pope Francis as best dressed man, GQ named Pope Benedict as one of the least influential people of 2013. He was #5 in a list of 26. GQ’s Drew Magary, under the subheading of “This was a bad year for impotent megalomaniacs,” explains to us why he thinks Francis is a drastic improvement over Benedict XVI in all categories: “The newest pope is sooooooo much better than Benedict, isn’t he? Who knew a pope could be, like, nice? Pope Benedict was a raging hardliner, a man who assumed the papacy with the sole mission of stubbornly defending all of its antiquated practices, and he couldn’t even cut it in that job. His most notable achievement was wearing red shoes. What a game changer, Joey Ratz. No one misses you.”

That Mr. Magary has not given a true description of either pope is obvious to anyone but low information types, and those who think that reality is whatever one wants it to be. Note also: Ignorance may not be terminal, but without simple courtesy it can develop into what the Drew Magary’s of the world would in any other case call hate speech. Who knew that red shoes could be so inflamatory?

Much of the attention that the secular elites pay to Pope Francis arises from from their wishful thinking that he is in his heart of hearts a Unitarian or at least a secret liberal accomodationist Catholic, ready to radically change the Church’s moral teachings. At the very least, they hope to see a papal administration much like that of a bishop in whose diocese I lived. That now deceased bishop never ever uttered a heretical word, but just as consistently refused to defend the Truth while at the same time employing a small army of bureaucrats to push his herterodox ideas of a progressive Church. The secular elites and accomodationist Catholics definitely considered him one of them. In short, the secular elites (and the writers over at the National Catholic Reporter) need to demonize Benedict as part of their manufacture of a pope of their liking, even if he is only their imaginary friend.

There is no evidence that the pope fits into any of the categories just mentioned. Indeed, the evidence is pretty clear that Pope Francis is a man of the Truth, and that he will not be silent in the face of attacks on the Truth. Indeed, what the Magarys and the other usual critics of all things Catholic seem to interpret as accomodation is one of the biggest international “public relations” projects in memory, presenting the face of the merciful and loving Jesus, which Francis knows, as we know, is the most powerful force in the universe.

When the elites think that they finally have pope that will give them and their libertine lifestyles a papal seal of approval or just that he will enjoy their flattery more than defending the teachings of the Church, they nevertheless provide him an opportunity to be heard. He clearly has the world’s attention, believers and non-believers, both the enemies of the Church and its friends. And he is very good at delivering the message. The code name for this operation is: The new evangelization.

(As an aside: Pope Francis must be aware that his popularity comes at a cost, not a small part of which is being paid with the libel against his two immediate predecessors by many in the world whom reasonable men would see as enemies of the Church.)

But why do the secular elites and radical individualists even want to believe that the pope is one of them? Or that there is now a “renewed hope for the Church?” Why do they even care what the pope thinks or whether the Church is renewed? Or even if this pope does not wear red loafers like his predecessors? Even the gay publication The Advocate named the pope as “Person of the Year.”

First, the post modern crowd is in rebellion against the notion of objective truth and natural law. They are true believers in the cult of relativism. In contrast, the Catholic Church is inherently the defender of objective truth and the natural law. The elites and radical individualists are very much like rebellious children, ever resentful of the parent who teaches and corrects in love, but hoping for acceptance of their rebellion to relieve their inner conflicts. For example, when one strips away all of the sentimentality and tortured legal arguments for the new “reality” of “marriage equality” i.e. a man being the spouse of another man, there you find a demand for acceptance, a demand especially directed at the Catholic Church. A pope who says “Who am I to judge?” fires up that desire for acceptance, and (unfounded) hope that the pope will abandon his faith and deconstruct the truth for their benefit.

The second reason, inherently related to the first, arises from the way that humans are created, the way we are wired. If St. Paul is correct, and he is, the law of God is written on the human heart… including the hearts of the secular elites over at Esquire and GQ, at the New York Times, and even at Georgetown University. That being the case, our hearts are naturally directed to our Creator. And we can’t get away. Our hearts are, as St. Augustine taught, restless until they rest in God.

God did not create and abandon. Start the clock, and take off. Our creation is a process leading us home: begun from the love of God ex nihilo before time, born into, tested and lived in history in the grace of the Incarnation, judged at the end of time and history, and rewarded or damned in eternity. But never are we not drawn to the Father, no matter how much we may fight it.

St. Paul sums it up: “When the fullness of time had come, God sent his Son,
born of a woman, born under the law, to ransom those under the law, so that we might receive adoption as sons. As proof that you are sons, God sent the Spirit of his Son into our hearts, crying out, ‘Abba, Father!’ So you are no longer a slave but a son, and if a son then also an heir, through God

Gal. 4:4-7.” The secular elites and radical individualists even if they mock the faithful and proclaim the irrelevance of the Catholic Church, want acceptance by those same faithful and especially by that same Church and its pope, who continue to reach out to them like loving parents, inviting them to respond to their Creator’s offer of eternal happiness.

They will never get the acceptance of their rebellion by the Catholic Church that they want. But they will never stop hungering for that acceptance either, because they will never be without the anxiety and restlessness of those who fight the love and power of their Creator. They may continue to write obituaries in their books and in their newspapers for a religion and its God which they continue to pronounce dead. But there will never be a corpse at the funeral. The gnawing feeling never stops, even if one entertains the fantasy that Pope Francis, who is loving and especially good at showing us the mercy of Jesus and the eternal promises of the Father (and who doesn’t wear red loafers), will condone their willful rebellion.