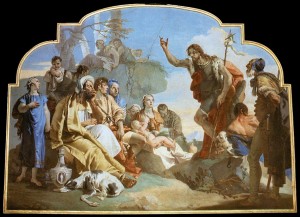 John the Baptist stood waist deep in the Jordan River.  Thousands of faith-seekers came to be baptized by John for the forgiveness of sins.  John believed that baptizing was his calling in life, the reason that he was born; indeed it was.  Then one day Jesus arrived and the life and mission of the Baptist took on a new dimension.  In addition to saving sinners he led them toward the Lamb of God, the sinless one through whom sins are forgiven.  God the creator sent Christ the Redeemer to provide the Sanctifying Spirit for the remission of sins.

Faith is a journey, a process which changes the believer and deepens the belief that Jesus is the Lamb of God and that through his Spirit he takes away the sin of the world.  Jesus was who John claimed him to be.  Every day he took his place on the bank of river and he wondered when would meet the One who was to come into the world.  “More than a prophet,” John preached in the power and spirit of Elijah of a baptism for the forgiveness of sins.

The gospel for the Second Sunday of Ordinary Time is a rare passage in which Jesus does not take center stage.  The action of the story centers on John and his testimony that Jesus is the Son of God and through his words he proclaims the truth for the ages.  John is aware that he, the Baptist, is the herald of Jesus. But John the Evangelist’s gospel knows nothing of the Lucan tradition of the kinship between Jesus and John.  To John Jesus is an enigmatic stranger and when they meet at the Jordan John’s life is forever changed.   His baptism is no longer for the forgiveness of sins; its purpose is revelatory: that Jesus may be made known to Israel, to the entire world.

Twice John claims “I did not know him” (1:31, 33) yet he identifies Jesus as “the Lamb of God who takes away the sin of the world” (29).  Like Jesus, the birth of John was foretold but Jesus “existed before me” (30a).  Though John may have no consciousness of the eternal heritage which they share they have been with one another from the beginning and their meeting happened at the right time in the right place and for the real reason: for John to make Jesus known.

It was the Spirit that inspired John’s ken and allowed him to identify Jesus as the Messianic Lamb.  This title of Jesus comes from the Old Testament and the paschal lamb through which God spared the Israelites from the angel of death (Ex 12); and the Lamb of God became the victorious apocalyptic force that defeated evil in the world, the spotless unblemished lamb of which the prophet Isaiah wrote of in his Servant Song (Is 53: 7-10).  And like a dove, the Spirit of God is the symbol of the new creation in Christ, the Spirit through which God purified the waters of the flood and turned them into the baptismal waters and offered peace to his holy people in their heavenly homeland (Gn 8:8; Hos 11:11).

By his preaching the gospel and his yielding to the Spirit John emphasized the permanent relationship between the Father and the Son, and between the Son and the Church.  Jesus is the permanent bearer of our sins and of the Spirit that takes away our sins.  The Spirit concluded the line of prophets from which John descended.  He began to decrease so that Christ could increase.  Now fully equipped for his purpose he climbed from the river and proclaimed the truth: “Now I have seen and have testified that he is the Son of God” (Jn 1:34).