Trending Now
You are at:Home»Featured»The Betrayal of the USS Cole
By Daniel Greenfield on May 12, 2016 Featured, Government & Politics, International Issues, Law & Justice 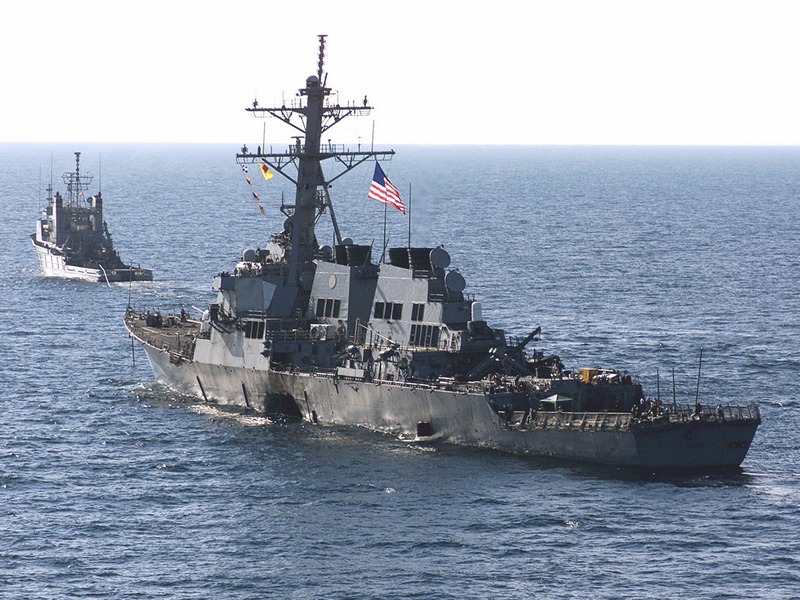 One Thursday morning, sailors on board the USS Cole were lining up for an early lunch. Seventeen of them died as an Al Qaeda bomb on board a fishing boat tore through the hull outside the galley. The dead included 15 men and 2 women, one of whom had a young child. For three weeks the crew of the USS Cole struggled to keep their ship from sinking while working waist deep in water with bucket brigades, sleeping on the deck and living surrounded by the terrible aftermath of the terrorist attack.

The survivors, wounded and whole, received the words “Glory is the Reward of Valor” written on the bent steel removed from the site of the explosion that tore through their ship and their lives.

The President of the United States promised that justice would be done. “To those who attacked them we say: You will not find a safe harbor. We will find you and justice will prevail.”

Despite Clinton’s words, justice did not prevail.

The father of Hull Maintenance Technician Third Class Kenneth Eugene Clodfelter believed that there would be justice, but he was to be disappointed. “I just felt, for sure, you know, they’re not going to go ahead and just kiss off the lives of 17 U.S. sailors,” he said. “In fact, they didn’t do anything.”

Walid bin Attash, a planner of the USS Cole bombing and who also played a role in the 9/11 attack, is still at Gitmo. His trial continues to drag on while he and his lawyers play games. Rahim Hussein al-Nashiri, another of the planners, is still awaiting trial. But Mashur Abdallah Ahmed al Sabri, one of the members of the USS Cole cell, has already been released by Barack Obama from Guantanamo Bay.

Sabri was rated as a high risk terrorist who is ”is likely to pose a threat to the US, its interests, and allies”, but that was no obstacle for Obama who had already fired one Secretary of Defense for being slow to free dangerous Al Qaeda terrorists and was browbeating his latest appointee over the same issue.

The very paperwork that was used as the basis for the decision to free Sabri describes him as “a member of a Yemeni al-Qaida cell directly involved with the USS Cole attack”. This cell “conducted surveillance” on the targeted vessel and “prepared explosives for the bombing”. Sabri had been arrested in Yemen for his involvement in the attack before he managed to make his way to Afghanistan.

Now he has been sent to the homeland of terrorism, Saudi Arabia.

After praising the “beautiful religious tradition” of Islam, which the USS Cole terrorists had “twisted”, President Clinton had promised that, “America will not stop standing guard”.

But under him, it never even started standing guard.

While Osama bin Laden prepared for US retaliation, evacuating Kandahar and escaping into the desert, President Clinton rejected military action against the terrorists claiming that the evidence against Bin Laden was not strong enough. The State Department warned that attacking Bin Laden would “inflame the Islamic world”.

Very little has changed since then. Muslim terrorists strike, and we are told to close our eyes and appease harder or we risk inflaming the tender sensitivities of the Muslim world.

Most Americans have grown numb to the parade of Islamic terrorists triumphantly exiting Gitmo as free men. No matter their risk rating, the Arabic names, the dark smirks and scowls all come to blend together. But Sabri is not just another Bin Laden bodyguard or operative. His cell has American blood on its hands.

The USS Cole attack was the final step on the road to 9/11. Our government’s inaction sent a message that America could be hit hard and we would not retaliate. It told Al Qaeda that American blood was dirt cheap and that the murder of our people came with no price.

These days we are sending that same message all over again.

In 2009, Obama had met with USS Cole families and promised them swift action. But a year later the families were accusing his administration of inaction and broken promises. His statement on the tenth anniversary of the attack made no mention of bringing the attackers to justice. Instead he stated that, “We will honor their legacy of selfless service by advancing the values that they stood for throughout their lives.” What were these values and how did they justify releasing one of the Cole cell terrorists?

From Clinton to Obama, there has been a long shameful tradition of substituting vague generic sentiments for justice. Of speaking of honor and healing, of pain and history, of tragedy and courage, while giving the killers behind the attack yet another pass. There is neither honor nor courage in that.

Mashur Abdallah Ahmed al Sabri has left American custody as a free man. It is not inconceivable that Obama will free even the masterminds of the USS Cole attack. As he empties Guantanamo Bay of the monsters squatting in its darkest corners, he slowly works his way toward the worst of the worst with an eye to letting them all go.

After the USS Cole attack, President Clinton contended, “If, as it now appears, this was an act of terrorism, it was a despicable and cowardly act.” This uncertainty and lack of conviction continues to haunt our War on Terror. Behind every statement about courage and honor, there is an “if”. Lurking behind every promise of action is yet another “if”. And these “ifs” keep anything from being done.

Clinton’s fight against Al Qaeda lacked any conviction that we were right and they were wrong. And that is why during the Clinton years, we lost and they won. Obama is not bothered by the hanging “If”. He knows that we are wrong and if the terrorists are not quite right, they are still more right than we are.

That is why Obama freed Sabri. It is why he freed a legion of other Gitmo inmates. It is why he has made shutting down the prison for Islamic terrorists into one of the major goals of his administration.

The USS Cole attack sent a message to Islamic terrorists that American lives did not matter to our government. Obama’s release of Sabri tells ISIS, Al Qaeda, and its brethren the same thing once again.

“They have given us their deaths, let us give them their meaning,” President Clinton declared. After all these years have passed, their deaths remain a debt that this country has yet to repay with meaning. The dead do not ask us for glory. Despite the promises of past governments, they have been forgotten beyond the close circles of their shipmates and their families. But they have a right to justice.

The valorous dead of the USS Cole have been betrayed too many times to count by each administration. Somewhere their restless spirits wait for a safe harbor in a better America that will see justice done.