Trending Now
You are at:Home»The Catholic Family»Education»The Bible Tells Me So: A Southern Gent Wows Catholic Kids with the Bible
By Lisa Mladinich on June 23, 2012 Education, Featured, On Books 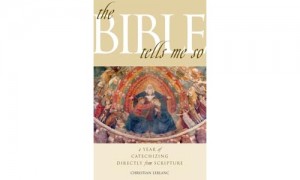 We will not hide them from their children, but tell to the coming generation the glorious deeds of the LORD, and his might, and the wonders which he has wrought. He established a testimony in Jacob, and appointed a law in Israel, which he commanded our fathers to teach to their children; that the next generation might know them, the children yet unborn, and arise and tell them to their children, so that they should set their hope in God, and not forget the works of God, but keep his commandments.

Architect and catechist Christian Le Blanc is wearing a suit and tie and standing in front of a group of 15 sixth graders at St. Mary’s parochial school in Greenville, South Carolina. It’s the beginning of the catechetical year on a warm Wednesday evening in September, and a noisy crowd of raw recruits has just shuffled in and slumped into chairs, worn out from a long day at school.

Before they can droop any further, he engages.

“Hey y’all, welcome to 6th grade Wednesday Night Sunday School. This is your textbook. I don’t want to see it again.”

“Take it home, there’s no time in class to be reading from the textbook; I’ll let you know each week what you ought to read for next week’s class, as in: read it at home.”

An outburst of objection to this flouting of rules is quieted with the cool-eyed reassurance: “This year is the opposite of last year. Don’t worry, you’ll get used to it.”

“Now, who likes parties and crafts and games?”

“I do! Me, too!” they chorus, eyes brightening.

“Okay,” he says, quickly, “you are going to be miserable this year. We won’t have any time for that stuff, there’s too much to learn. Yes?”

“No parties?” they gasp.

“Nope. Look here’s what I want y’all to do this year [on the board]: SUFFER.”

“Yes, suffering is good, and I’m the meanest teacher in Sunday School. Yes?”

“My brother says he really didn’t suffer last year and he had fun.”

“Oh. Well, he was supposed to suffer. If you do have fun in here it’ll be a miracle, but keep it to yourself. Don’t spoil the suffering of others. Hey there, daughter, stop smiling!”

It’s only 6:35 and he has them laughing, engaged, arguing with him, and yes, paying attention. The learning quickly follows with Chapter One of Genesis, in a flurry of storytelling, scriptural references, explorations of deeper meanings via English, Spanish, Latin, Hebrew, Greek, classic art reproductions, cartoon drawings, practical and moral applications, personal witness, creative dramatics, and lots of comedy. They’ve been guided into guessing right so many times they think they’re Bible geniuses.

When the hour is up, they are intrigued, excited, and armed with enough food for thought to begin to effectively engage their families and friends outside of class. When the year ends, they will have truly learned 50 Bible stories, and acquired a thoroughly Catholic appreciation of the progression of Salvation History culminating in Jesus Christ and the Holy Mass.

“From the get-go they learn that the body and soul are an integral unity,” he says, drawing a parallel to what he does with scripture. “Catholicism and the Bible are not separate realities. The Bible is the literary manifestation of Catholicism.”

But he doesn’t teach the entire Bible. “It’s not comprehensive or exhaustive. We’re just skimming the tops to see how the Bible works, providing a Catholic framework.”

Raised in Louisiana in a totally Catholic environment, Christian says, “I didn’t know there was a single human being that wasn’t a Catholic. On Good Friday, everything closed.”

But at the age of eight his family moved to South Carolina. “I went through terrific culture shock. From that point on I was percolating in a much more explicit Bible culture than in Louisiana and it became an integral part of my evolving world view.”

Married for 24 years, a father of 5 and grandfather to 2, Christian and his wife, Janet, an Art History professor, had been teaching RCIA since 1999 using a Bible-based program they created themselves (with their pastor’s permission). But when he was asked to take on the sixth grade eight years ago, he was annoyed:

“I did not want to deal with kids: what do they care about the Council of Nicaea? But God does work in mysterious ways. I was wrong to think I’d have to dumb things down for them. Sixth graders are still very open to learning about God, their brains are nimble, and you can move along at lightning speed, changing references and jumping from Abraham to David to Christ in a heartbeat.”

So, using a program designed for adults, Christian began to find his way with the kids. “Unlike the adult class, where I could just give a verse or two, and rely on individuals to already know, or check, the bigger passage on their own, the kids needed more context. For example, if I were discussing baptism with adults, I could just summarize Naaman and Elisha; but with the kids, I needed to tell the whole story. In fact, I wound up acting the story as much as telling it, which was great fun, and the little brains soaked it right up.”

About 25% of the children in each of his classes are Hispanic. “They speak English better than I do, but they’re shy,” he says. So he finds ways of drawing them in and affirming them by asking questions no English speaker can answer.

“Spanish kids make a contribution to class that is very important. I tell the kids that Spanish is one of Latin’s beautiful daughters. The Spanish names for things almost never have the same exact meaning of the English word. When I use the Spanish child as a resource, it’s good for them to see they knew something the other students didn’t know. It’s important for the English speakers to realize that Catholicism is Catholicism all around the world, for over 2,000 years, not just in Greenville, speaking English.”

“How do you say, ‘Christmas’ in Spanish?” he asks everyone.

“What does it mean?”

From there the discussion covers birth and babies, the helplessness of the infant, and God’s extraordinary humility.

To emphasize God’s fatherly love and the tenderness of Jesus’ condescension in becoming an infant, he brings a small child’s chair into class and describes the way he used to squeeze his huge adult body into a very tiny seat in order to sit for ten minutes at a time and play Tea Party with his young daughter. The children are “just roaring.”

“Because you love her,” they all respond immediately.

“They know. They know the answer without thinking,” he says. And the point is indelibly made.

“You can let the Bible teach them. A lot of times the Bible is not didactic. It just tells the story and it’s only from reflecting, pondering, re-reading, and thinking about it and your own life that you come to understand it. For instance, I know the Ten Commandments are written to be simple, and even children can read and absorb and profit from them. The drama and pleasure of a story or solving a puzzle is gratifying for everyone, but especially for kids. I only give them enough information so they can figure it out for themselves.”

Christian’s new book, The Bible Tells Me So: A Year of Catechizing Directly from Scripture, is a wonder, and must not be missed by any catechist or any Catholic adult whose faith could use a stronger foundation. Readable, entertaining, and thorough, you’ll experience it as though you were a part of his classroom, learning and laughing along with the children. With its in-the-moment style and interactive approach, it’s almost like reading a great film script. But so much richer. As the modest preface tells you, the book recounts a full year of Bible-based teaching, “…featuring both Bible-sourced Catechesis and the give-and-take between teacher and students.”

As a guide for how and what to teach, it’s invaluable. The 37 chapters have delightful names such as, “Adam’s Nose,” “Smarter than God,” “Miraculous Mothers,” and “Sing along with Kind David,” and include photos of some of Christian’s many whiteboard drawings. Some classic art reproductions are also included.

In a savvy and fascinating afterword, the author gives nuts-and-bolts teaching tips, like “The catechist drives the class…” and “Kids love to go sideways…” that help you make the most of your own classroom experiences.

An image appendix includes diagrams of Moses’ Meeting Tent, Solomon’s Temple, Christ’s Church, and then compares them, calling them “the middle ground between earth and heaven.”

To say that this program is beautiful doesn’t do it justice. To say that Christian LeBlanc is someone sorely needed in the Church is a major understatement.