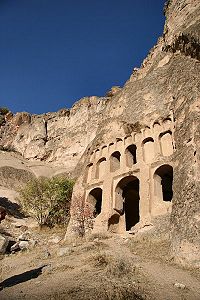 Standing at the base of an old, graying, wooden ladder I didn’t know what I would find in that mountain-cave turned church. As I ascended those ten or 12 steps my heart pounded, my breath grew short and my eyes were filled with awe.

What I found in that stone-cooled room in the middle of the Cappadocia region of Central Turkey would change my life forever. As I stood on the top rung of the ladder I peered inside to see just what those ancient Christians saw: a white-stone room cut no more than six feet wide, eight feet deep and seven or so feet high. To the left and right were stone benches and in front of me was a stone-carved iconostasis (the screen or wall between the nave and the sanctuary in an Eastern Church). As I pulled myself up into the Church, I discovered an altar behind the iconostasis and a grotto cut into the wall to be used as a tabernacle.

Standing in the middle of this roughly 1,500-year-old Church I couldn’t believe I was physically touching one of those ancient sites made holy by Christians who understood what it meant to believe. These people of Asia Minor knew in the pits of their stomachs that God became man; that He lived, died and rose again. At the very center of their lives — and often at the very cost of their lives — they believed that “God so loved the world that he gave his only Son, so that everyone who believes in him may not perish but may have eternal life” (John 3:16).

These people — who cut through rock with the most basic tools in order to build a temple for the Lord — knew without questioning. They knew at the level of their being what it meant to be a Christian. They knew their job was to honor Jesus and model themselves after Mary. They knew then by practice what we know by definition: that true worship is standing forever before God with your mind in your heart. Without explanation or incentive, they lived their lives in types of mangers (whether in mountain caves or underground caverns). They gathered what they could to live and allowed their minds to sit comfortably on the thrones of their hearts, which had been built by the stone of Divine Wisdom, the fire of the Holy Spirit, the flesh of the Incarnation, and their own simple gifts of gold, frankincense and myrrh. They testified to their faith with their very lives and I am here to bear witness to them. In that cave, like the dozens of others we visited during that May of 2007, I could hear the hymns of praise, I could smell the incense they used, I could feel their worries and their pains, and I could feel their hopes and their joys. I could see them processing in and out of the Church, in and out of their lives, knowing that God was with them and in them. They were unified in the one Holy Spirit and, like St. Paul, they knew that “living is Christ and to die is gain” (Philippians 1:21).

To say I couldn’t believe my eyes would be an understatement. To say that I was speechless would be an understatement. Especially when you consider that I knew something was ‘happening’ even before I saw the ancient Cappadocian land of St. Basil the Great, St. Gregory of Nyssa and St. Gregory Nazianzen. In fact, while standing on a corner in Istanbul, across the street from the Hagia Sophia (Christendom’s largest Cathedral for 1,000 years) I was already beginning to feel the Spirit coursing through my veins, filling every tissue, girding every bone and pulsating in every muscle. Today, the only possible words I can find to describe what happened was that the Holy Spirit literally entered into my mind like a rush of wind or fire or water, moved through my entire body and came to rest in the deepest part of my being.

While experiencing the presence of God is not new in my life — in fact I’ve never gone through a time when I “didn’t feel” God within me or that I “couldn’t experience” the presence of Christ at Liturgy or “see” the Spirit in the world — these particular moments threw me back on my heels. Perhaps like Moses at the burning bush or Peter, James and John at the Transfiguration, I witnessed something even more profound. I was humbled then and I am humbled now. I still question my worthiness for such an experience, but these days I am mainly working at being, learning to live nestled firmly in the care of The Good Shepherd (John 10:11) knowing all the time I am on a journey toward the Eschaton, being ushered forth by His Spirit toward that moment when we will see the New Heaven and the New Earth (Revelation 21:1).

As I have relayed this story to others I am often asked how such a thing “happened” to me or how it might “happen” for them. The simple answer is that I do not know. Having spent much time with a spiritual director, I can tell you that any potentially emotional or psychological reasons for these experiences were long vetted. Since this occurred about two years ago (meaning that a significant time has passed) and it is as real for me today as it was at the time, I can continue to affirm for you that what happened was the truth and it was given by God.

While these particular types of experiences come to us at times and for reasons only He knows, the two most important things we can do on a daily basis is to remember to be open and to be willing to cooperate as God reaches out toward us. One way that you can do this, starting today, is to renew your commitment to being fully present at the Eucharist. Specifically, be attentive to the prayers up to and including the consecration.

Next time you are at Liturgy or Mass look for what is called the anamnesis and also the epiclesis. Simply, the anamnesis is the portion of the Eucharistic prayers through which we remember the life of Christ (up to and including His betrayal and death on the cross). The epiclesis is the portion of the prayers which invokes the Holy Spirit so that He may come to make holy the bread and wine, and the people present. Pay attention to those prayers because in them you are a participant in the life Jesus lived 2,000 years ago, you are a witness to Him now and you are being given the foretaste of Him in the time to come. Remember always to “Be what you can see, and receive what you are” (St. Augustine, Sermon 272, Pentecost) so that, outside of the Liturgy, you may abide in your faith through the cornerstone of His Wisdom and the urging of His Spirit. “For every good and perfect gift is from above, coming from You, the Father of lights. To You we give glory, thanksgiving, and worship, to the Father and the Son and the Holy Spirit, now and forever and to the ages of ages. Amen” (from the dismissal of the Liturgy of St. John Chrysostom).