Trending Now
You are at:Home»Columnists»The Changing Celebration of Halloween
By Jake Frost on October 31, 2013 Columnists, Featured, Live in Christ, Parenting 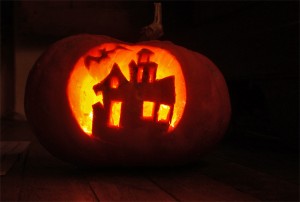 Over the years of my childhood, I experienced a transformation of Halloween.  When I was young, we donned costumes and wandered the neighborhood with Dad trick-or-treating, and always had a good time.  Mom’s seamstress skills and ninja-mad crafting capabilities helped create some fantastic Halloween-night ensembles.  She sewed Dracula capes and fuzzy Daniel Boone coon-skink caps.  And Mom had a dash of sparkling, masquerade-manufactory genius coursing through her veins.  She always came up with the extra little touches that turned a costume into a memory.  Like the year I dressed as a hobo.  I wore one of Dad’s suit vests, a tie, an old fishing cap, and tied a red bandana to the end of a stick that I carried over my shoulder.  Then came that special Momma flourish:  she smeared a little Crisco along my jaw and sprinkled coffee grounds over it, and voila!  I had a beautiful hobo stubble.  In a stroke, with that one little bit of costuming magic, I was transformed from just another Halloween bum into the King of the Road.

And one year Mom made a legend by creating a costume like no other:  a lion suit that still stands amid the annals of Halloween as the greatest work of the costuming art ever conceived and executed outside a Star Wars film set.  The body was sewn from golden-brown faux-fur material.  She knit a lion’s tail and sewed it to the furry lion suit.  All very nice, but what really brought the wow was the mane.  Mom knit a head piece that you pulled on like a hat, except it covered your whole head and neck, leaving only your face open.  Then she fastened (whether by crocheting, hooking, or tying, I don’t know) hundreds of strands of yarn—brown, red, gold, and orange—all over the headpiece, creating a luxuriant, shaggy mass of radiant lion mane—and there were even two neat little knit lion ears protruding from the dense profusion of waving mane.  To finish it off, Mom knit lion paws and feet that you pulled on like mittens and socks, adorned with the same glorious yarn-shag as the mane.  It was awesome—and it’s still in use to this day, some 30 years later, by Mom’s grandkids.

Other people’s costumes could be as much fun as our own.  We took turns manning the candy distribution center at our own homestead, and passing out candy was the best way to see the fanciful fabrications from the fertile imaginations of our fellow Halloween revelers.  Dad would take the top panel off our storm door, and we would sit inside the door on a stool, handing candy out through the open panel, exchanging “Trick-or-Treats!” and “Happy Halloweens!” with other merry-makers.  I remember a pair of kids that were dressed as a set of fuzzy dice, in boxes painted red with white dots on them.  And there were the Christmas presents:  kids wearing boxes covered with wrapping paper, ribbon and bows.  Tinfoil knights, hairy werewolves, and green faced Frankenstein’s all passed by our door.  One of my favorites was a family with all the kids dressed as playing cards.  They wore panels of cardboard on front and back attached together by ropes that hung on the shoulder, like old-fashioned sandwich board signs you see people wearing in photos from the 40’s.  The back panel was painted like the back of a playing card, the front like the face of the card.  I was too young to recognize card hands at the time, but I wonder if they made a full house all together?

And of course leading up to the big night we’d have already made our annual trek to the pumpkin patch and carved our pumpkins with triangle eyes and nose and a square-toothed jack-o-lantern grin.  Then we’d light candles inside their hollowed out shells and watch them glow orange in the dark.  We made felt witches, ghosts, and pumpkins that we hung on our walls and windows, and a scarecrow stuffed with leaves to stand guard on our front steps.  We enjoyed our Halloweens, and we knew how to celebrate them right.

But there was no mistaking the change that was underway with Halloween, even then, and one year Mom and Dad finally made the decision that our family would do something different.  They instituted a Harvest Festival for our family.  We still went to the pumpkin patch, and carved our pumpkins, and made our scarecrow, and all our felt crafts.  But instead of costumes and trick-or-treating, we did Harvest games and had treats at home.  The games were things like bobbing for apples, pin the nose on the pumpkin, sack races, and a clothes pin drop.  We carried bags that got filled with treats and surprises at each of the different games:  candy, spider rings, glow wands and other items of delight and deliciousness.  The crown of the evening came at the very end, when, tired and satiated and filled with fun, we all lay down on the floor in our living room in front of a crackling fire.  Mom and turned all the lights off, and read spooky stories to us by the firelight.  The long, wavering shadows cast by the flickering flames added to the eerie thrill of it all.  It wasn’t too scary, though, as testified to by the number of little ones who had to be carried to their beds when the stories were over.  The Harvest Festivals were every bit as much fun as the trick-or-treating had been.

Now that I have kids of my own, I like the idea of Harvest Festivals even more.  The downward spiral of Halloween has continued over the ensuing years.  For one, a lot of Halloween just isn’t that much fun anymore.  In the last few years, we’ve had kids come to our door with only the barest pretense of a costume—and some no costume at all.  I’ve passed out candy to kids and gotten nary a “Thank you!” or “Happy Halloween!” in return.  Instead, I’ve actually had kids hold their bags out to me again and demand:  “Give me more.”  After one of those responses, I looked over at the kids’ parents.  But the parents weren’t the least bit phased or put out.  They just stood there, staring sullenly at me, with an expression that seemed to say:  You heard her, hand over the candy.  That kind of Halloween experience doesn’t seem very festive.  Just greedy.  It’s more like looting the local Wal-Mart after a natural disaster and calling it a community celebration.

Then there are those who don’t really qualify as kids anymore and should have retired their nights of trick-or-treating some years ago.

Mostly, though, there is an unmistakable darkness to the new Halloween.  A darkness that didn’t used to be there, and which seems to be growing.

It’s unfortunate, because much as I enjoyed our Harvest Festivals as a kid, I also loved our Halloweens when we were still trick-or-treating, and I wish my kids could have that kind of experience, too.  But wishing won’t make it so, and Halloween just isn’t what it was then.  So, as a parent, you do what you can—where you are, with what you’ve got.  “Bloom Where You Are Planted,” as my Mom embroidered in one her needlework “Threads of Wisdom” sayings that hung around our house when I was growing up.  Which, really, is particularly appropriate for celebrating the vigil of a feast day honoring all saints.

Because that’s just what the saints did:  the best they could, in answering God’s call and doing God’s will, right now:  where they were, in the times they found themselves living in.  And you can be sure those times were never perfect, that all temptation and violence and greed and corruption and all the rest of the baggage of a fallen world, was never banished.  No, the saints lived in a fallen world, just like you and I do, and acted amidst circumstances that ranged from difficult, at best, to downright tortuous and deadly at worst.

There’s a temptation we all face to get sidetracked in our own imaginings of how we think we’d like the world to be, both for our own personal good and that of the world at large.  But in The Secret Knowledge, a book that’s about contemporary politics on one level, but about human cosmology on another, David Mamet says:  “The question ‘What would you do differently?’ . . . is not only a foolish but a costly indulgence.  The useful question is, ‘What will you do now?’”

Mother Teresa expressed something similar when she said:  “Yesterday is gone.  Tomorrow has not yet come.  We have only today.  Let us begin.”

We can only act in the here and now, doing the best we can where and when we are.  But we can take some confidence in remembering, as Blessed John Henry Newman wrote in one of his prayers:  “God has created me to do Him some definite service . . .  He does nothing in vain.  He knows what He is about.”  We may not understand our own messy, chaotic, corrupt, dark, frustrating, and often maddening times, but God chose us for this moment, in this place.  And He knows what He is about.  One little step we can take is to find a way, as best we can, to keep the feast and vigil of All Hallows Day as it should be kept.  After all, the saints who have gone before us have won the crown of sainthood, and that is something worth celebrating.  And they are praying for us and helping us right now, and that’s worth celebrating, too.

These days will pass away, but the saints will remain—we have much to be thankful for!