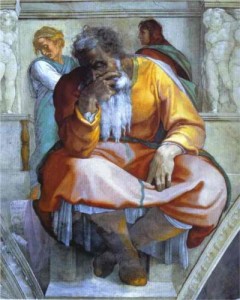 Jeremiah was the loneliest and saddest of the prophets but he was one of the greatest.  He was a descendant of Eli, the priest who taught the prophet Samuel.  Jeremiah did not want to be a prophet.  “I know not how to speak,” he told God.  His oracles reveal a sensitive man and the prophetic call brought hardship.  But the call burned in his bones like fire and he obeyed.

Many times during his life Jeremiah regretted that decision but he bore his cross and preached a message of repentance to save his people.

God forbade Jeremiah to marry so he would not have see his family suffer; the prophet had only his vocation and God’s word.  Following God brought scorn and mockery, yet Jeremiah believed that repentance was the only hope.  He lived in Jerusalem in the 7th and 6th centuries BC, before the city was conquered by the Babylonians in 588 BC.  Jeremiah tried to warn the Israelites that if they didn’t repent and return to the faith of their ancestors disaster would strike.  And it did.

No one wanted to hear that message, especially the leaders who attempted to silence the prophet.  They slandered him and put him in prison.  Then they threw him into a well and left him to die but he survived and preached all the more.  Obey God and the Law and not the Temple religion polluted by politicians.  The Word of the Lord was the only hope for the survival of the Jewish nation, he said.  “If you surrender to Babylon  you will live and the city will escape destruction.”  The leaders wouldn’t listen.  Jerusalem was lost.

Pashur, the chief Temple officer, had Jeremiah flogged and put in stocks.  Jeremiah said to Pashur, “This is what God says to you: ‘Since you are a false prophet, you will be carried captive to Babylon.  There you will die’.”

Jeremiah had one friend, Baruch, his scribe, who wrote down all his prophecies.  His writings reached the king, Jehoiakim, who ordered them to be read aloud in his court.  Jeremiah’s words infuriated him.  Sitting on his throne by a brazier, he fed the pages into the flames.  Again Jeremiah dictated the entire book to Baruch who visited him in prison.

In his book Jeremiah accuses God of seducing him into accepting his vocation, which brings “only derision and reproach all day.  I will not mention him, will no longer speak in his name.”

He wants to quit but admits that God’s Word impels him.  “I grow weary of holding it in, but I cannot endure!  Terror on every side.”   The cross he took up is too heavy to bear but he carries on because he believes the Lord will make him a wall of brass that his enemies will not breach.

In the end Jeremiah was vindicated; his prophecies came to pass and he witnessed the destruction of Jerusalem.  He fled to Egypt where he is lost to history but hopefully he received surcease from his sufferings.  Faithful to God, he was a preview of John the Baptist and Jesus, who taught us to bear our crosses because he loves us too much to hide the truth, even when we don’t want to hear.

Jeremiah was a misunderstood genius, emotional, a birdwatcher and a lover of animals and his nation, who bore his cross in isolation.  No other Old Testament character expresses such a moving revelation of his inner conflict.  He accepted the courage from God so he could speak the truth.  Prophets foretell the future but they also call people to repentance in the present.  Jeremiah looked far into the future to the time of the Messiah and carried his cross with all his strength toward salvation.