Trending Now
You are at:Home»Featured»The Death of Reason: SSM in Washington State
By Joseph Backholm on February 15, 2012 Featured, Law & Justice 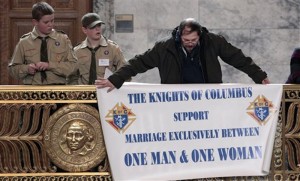 Perhaps the title is a bit alarmist. The decision by the state legislature to redefine marriage may not actually be the death of reason, but more evidence of it.

What’s interesting is that a body of legislators who have, presumably, told their own children that “I want it” is not sufficient reason, have been completely bamboozled by this mutiny of emotion. While we should be indignant, there might be room for a bit of sympathy as well since many of us have also done irrational things we later regretted in the name of love. Perhaps it really can happen to anyone.

The problem is, in a legislative body, we usually expect cooler heads to prevail. Maybe it was too close to Valentine’s Day.

There are two primary arguments in the effort to redefine marriage. First, they argue that the state should grant marriage licenses based on the level of love and commitment people claim to share. Second, they argue that there is no difference between a homosexual and heterosexual relationship. Combined, they offer a very flimsy foundation for public policy.

People get married for many reasons that the state has never inquired about. They get married because someone got pregnant, because it’s good for their career, for immigration reasons, because they’re gold-diggers, or because of good old-fashioned romance.

The private reasons people have for getting married have not been relevant to whether the state recognizes it — until now, apparently.

I cannot imagine anything the government should be less involved with than assessing the quality of a couple’s love before granting a marriage license.   Imagine the newly appointed Love Czar heading up the newly created “Love Quality Commission” tasked with ensuring that the emotional maturity and conflict resolution skills of the loving, consenting adults is adequate to receive the governments title of marriage. If the government can grant marriage licenses because the love/commitment threshold has been met, can they deny them if it has not?

Despite these (obvious?) realities, if I had a dollar for every time I heard a legislator say “marriage is about love and commitment” we could solve the state’s annual billion dollar budget deficit.

Secondly, they argue that there is no difference between homosexual and heterosexual relationships. The evidence for this is the tremendous weight they give to the love and commitment a couple claim to share. Since we must admit that love and commitment are not and should not be relevant to the state’s recognition of marriage, it becomes easier to acknowledge that there are meaningful differences between relationships we call marriages and those we do not.

Certainly different kinds of relationships have similarities, but similarities do not eradicate differences. Once we remove the fog of people’s feelings from the debate, there is no basis on which to argue that homosexual and heterosexual relationships are in every way the same for the simple reason that men and women are different. That used to be something we celebrated — way back when we used to celebrate our differences.

Many relationships, other than marriages, have tremendous personal significance to those involved. The fact that we do not call them marriages is not evidence of mistreatment but recognition of reality.

Of course, for some this entire argument will serve only as confirmation of my irrepressible bigotry. But for those of you who know better, I hope this helps you stay stronger than our legislators. Truth is on our side, and truth always wins. There are some things that cannot evolve. Two plus two will always equal four, even if five resents it.