Trending Now
You are at:Home»Columnists»The Five Things that Impress Me Most About Pope Francis
By Marge Fenelon on July 25, 2013 Columnists, Featured, Live in Christ 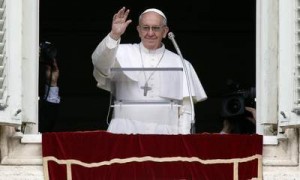 Since his election to the papacy on March 13, 2013, I’ve been following Pope Francis – at times actively, and at times passively, but always keeping me eye on him via the Catholic newspapers, Internet sites, and Vatican news bulletins. Although I was initially skeptical about what kind of pope Cardinal Jorge Mario Bergoglio would become, I now find myself liking what I see. And hear.

I appreciate his simplicity and directness, and I appreciate even more that he practices what he preaches. He’s asked the Church to pare down, be attentive to the needs of those around us, be more prayerful, and become a Church, “…for the poor, and of the poor.” He means what he says, and has taken the first steps to prove it by paring down his own lifestyle. I almost could say that it’s a papacy of the poor and for the poor because this Pope is poor in spirit, and he speaks to the poverty of spirit that’s buried deep within all of our hearts. I greatly admire that.

Based on my observations, I’ve come up with a list of five things that most impress me about Pope Francis.

1. He lives at Domus Sancta Marthae (St. Martha’s House). Instead of moving into the papal apartment in the Apostolic Palace, Pope Francis has chosen to remain at Domus Sancta Marthae because he wishes to remain in community with other clergy and avoid the luxurious isolation of the papal apartment. He says daily Mass there and takes his meals with the other residents.

2. He drives a Ford Focus. With few exceptions, the Holy Father rides around in a Ford Focus compact – what I would consider an economy car – rather than a limo or the Popemobile. “It hurts me when I see a priest or a nun with the latest model car, you can’t do this,” he said to young and trainee priests and nuns from around the world on July 6, 2013.  He doesn’t want them to do it, so he doesn’t, either.

3. He speaks spontaneously. As a former Public Relations consultant, I can imagine that this has caused some hair loss for the Pope’s media relations team. While some of his addresses are scripted, most are not, which makes it tougher to find full text versions of his addresses (at least in a timely fashion). On the other hand, he speaks from his heart, and that demonstrates his genuineness and love for God’s people.

4. He doesn’t shirk reform, nor is he too proud to seek counsel. A month after he became the 266th Pope, the holy Father appointed a council of eight cardinals from around the world to advise him in the governance of the Universal Church. His decision was a result of discussions that took place during the General Congregations that led up to the Conclave that elected him Pope. His goal is to reform the Vatican bureaucracy.

5. He carries his own bags. As he boarded the Alitalia Airbus 330, at Rome’s Fiumicino Airport on Monday morning that would take him to the 28th World Youth Day in Rio de Janeiro, Pope Francis did something no other pope in recent memory has done: He carried his own bag. In addition, he granted individual interviews to reporters rather than choosing the more customary press conference. As if that wasn’t enough, the Pope made another out-of-the-ordinary decision. Instead of the usual in-flight question-and-answer session with the press on board the plane, he’s chosen to spend part of the flight getting to know the journalists traveling with him and would hold informal discussions with them. This was announced by Father Federico Lombardi, the Vatican Press Office director, at a July 17 pre-World Youth Day briefing.

If the Pope Francis’ papacy continues as it’s begun, I think the Church is in for countless more surprises. Some of them will be inconsequential and lighthearted, like his carrying his own travel bag. Some of them will be more difficult as he proceeds with necessary reforms. Some of them will make us pause to re-evaluate our own lifestyles, like his choice to simply and in community with his fellow priests and bishops. Regardless, I’m looking forward to those surprises and the effect they will have on myself, my family, and my Church.