Trending Now
You are at:Home»Featured»The Gospel Card
By John Kirkwood on April 9, 2013 Featured, Live in Christ 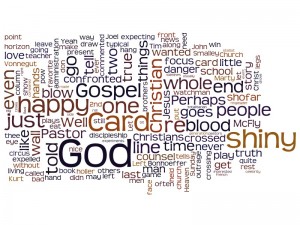 “When the statist is confronted with truth, he feigns outrage then goes on a fret-offensive. The liberal protects his status-woe with a house of cards and his two favorite plays are ‘The Covet Card’ – ‘four legs good, two legs bad,’ and ‘The Race Card’ – ‘some animals are more equal than others.’ It’s time free men stood up … and huffed and puffed.” – The Parson

Thinking recently about two of my favorite political philosophers, Marty McFly and Dietrich Bonhoeffer – not often coupled with each other, but the two people I turn to most to basically deliver a simple point.

As an American, I am tired of waking up every morning staring at a Bill of Rights in my hand that is disappearing at the speed of Marty McFly’s family photo. The 1st, 2nd, 4th and 5th amendments fading in front of our eyes; the 10th has been gone for an age now. There comes a time when a McFly has to ball up the fist and tell Biff to “step off … get hence … and tell your story walking.” WWBD! What Would Bonhoeffer Do if he could go back to 1929 knowing what he knew in 1939? He’d act. He’d scream from the rooftops. He’d blow the shofar.

The left has a blatant double-standard on racism: when face to face with truth, they draw the race card faster than a virgin’s crucifix in front of the vampire Lestat. Sadly, the left isn’t alone in this game; there are “shiny, happy” Christians who, when confronted with duty and discipleship, play “The Gospel Card.” What is “The Gospel Card?” Let me give you an example:

Tim Tebow cancels a speaking engagement at a historic Baptist Church in Dallas because of pressure from the Alphabet Mafia; to cover his pusillanimity, he plays “The Gospel Card:” – “I just want to speak about God’s love and show the world how big and how awesome our God is.” Joel Osteen goes on Piers Morgan and when asked why he doesn’t talk about sin, says, “Well, that’s not what I’m anointed to do, I believe my calling is to encourage.” Granted that last one was more like the Stuart Smalley card, but it is a derivative.

So what is “The Gospel Card?” It’s the card that embarrassed believers play when they choose their will over God’s; it’s an alibi for apathy and in most cases a justification for cowardice. Ultimately, these things are cop-outs for not living a life worthy of the blood of Christ. A true disciple must be willing to put it all on the altar … comfort, personal goals and even reputation. Let them go up in the flames and be the fragrance of the throne room of God. Quit trying to make news in time and start making news in Heaven. These examples are even a bit soft because while Tim and Joel are shiny and happy, they’re really not your typical players.

Inspired by a Doug Giles column that described a St. Louis Pastor who held a “toy-gun” buy-back program; I decided to go man the wall. The church that I pastor held a 2nd Amendment Sunday that was meant to draw attention to the Biblical doctrines of self-defense and along the way, have a little fun at the totalitarian’s expense (see story here). I was expecting the Left to have a hissy fit; what I wasn’t expecting was one from the shiny, happy Christians. A well-known Christian radio personality called the whole event “a circus” and said that I had “crossed the line.”

It prompted a number of people to chime in and disagree with her. One Pastor, John French from Texas commented, “Perhaps when Elijah told Ahab to gather all the people on Mt. Carmel that was ‘crossing the line,’ and a publicity stunt. Perhaps when he mocked the priests of Baal that was ‘crossing the line,’ because that drove them to mutilate themselves. Perhaps Jesus ‘crossed the line’ when he told the Pharisees to go tell Herod that he was NOT going to leave and that he was going to continue doing whatever he wanted to do where ever he wanted to do it. Perhaps Jesus ‘crossed the line’ when He told a gentile she was a dog when she only wanted help for her poor daughter. When you take only one side of a story and leave out facts you can present it in such a fashion so as to make it seem over the top and inappropriate.”

And that’s just the point; if Jesus were here today and introduced the money-changers to the working end of the whip, he’d be dressed down by the neo-Pharisees for his lack of compassion and his tendency to focus on the wrong things. They’d drop the Gospel Card on him because they’re clueless and their pride has been challenged – like when Dangerfield in Back To School got a “C” on his Kurt Vonnegut book report after having hired Kurt Vonnegut to write it for him.

The typical shiny happy Christian is usually quite miserable beneath the sheen of his well-managed veneer. And this is where shiny happy-Christians and liberals cross paths; both are self-righteous, judgmental, utterly humorless and for the most part, hypocritical frauds. It’s not a question of being “holier than thou,” the shiny happy Christian is “holier than God;” creating new rules of their own and along the way, muting others. Sanctimony is their default setting.

When confronted with true discipleship, these Christians will say things like, “Well, we’re citizens of Heaven,” which is true but not the whole truth, and they’ll follow that gem with, “Well, we’re just a passing through.” But the capstone of all things shiny and happy is the venerable, “We’ve read the end of the book and in the end we win.” As one of my readers commented, “They say, ‘keep praying … We win in the end!’ Yeah, IN THE END, idiots! But there’s a lot of stuff that goes down BEFORE the end and you have to be prepared and you have to prepare the next generation.”

The shiny happy Christian never enters the game but is quite fond of posing with their letterman’s jacket. Most of the time they’re not even on the sidelines, they’re in the stands – popcorn in their helmet, bemoaning their brother’s performance. Alright, I may have jumped off sides, I may have even missed a block, but my uniform is covered with mud and blood and yours looks like it could fly from a Gondola in a Hawaiian Tropic commercial. But then again, white is the color of surrender.

It is true that each believer has diverse gifts, and that the eye can’t say to the hand, “I have no need of thee;” but where did modern evangeli-fish ever get the idea that we have only one, narrow and unusually safe, avenue of ministry?

God does ask his children for one thing – “present your bodies a living sacrifice,” but He never tells a preacher to skip the “whole counsel” of God just to focus on self-esteem. He never tells a “celebrity” Christian to forsake the admonitions to “cleave to righteousness and abhor evil” to solely focus on love.

When the Ephesian elders cried on the sleeves of the Apostle Paul, he told them that he didn’t have any blood on his hands because he taught them the whole counsel of God, often with tears. He was referring to the 33rd chapter of Ezekiel where spiritual leaders are compared to a watchman on the wall who was required to blow the shofar when he saw danger on the horizon. If he didn’t, and the people were slaughtered, the blood would be on his hands.

IT REALLY IS – FOR THE CHILDREN:

So let me get this straight; our administration is supplying assault weapons to Mexican Drug Cartels and Syrian Rebels, but the Left gets their collective panties in a wad over a kid and his Pop-tart? Yeah, right! And I’m the ringleader of a circus?

Pastor Tori Swingrover from California asks, “Wouldn’t it be nice if a child could attend a school where he could be hugged by a teacher with no danger of being molested? A school where he could eat cupcakes with green toy soldiers? Where he could play cops and robbers at recess, and tag and maybe even dodge-ball? Where he wouldn’t be expelled for pointing his finger and saying ‘pow, pow?’ Where he could eat a sack lunch made by his mother without being accosted by the nutrition Nazi’s? Where he could nibble a pop tart into any shape he chose? Where he could bring a water pistol for show and tell without being expelled? Where his teacher could open class in prayer and the pledge? Where he is not told that George Washington was a bad person and where it is ok to love his country? Where he isn’t a pawn in social experiments? Where the administration officials would let him grow up before exposing him to sexual technique education? A school that was more interested in teaching history, math and science than the benefit of “man on man” rectal hegemony. Where he could still have a best friend and still strive to be the valedictorian? Wouldn’t it be nice?”

So men of honor respond with outrage and a little humor, and the jaundiced eye goes apoplectic, drops the Gospel Card and sighs an exasperated, “I have no need of thee.” Well I’m content being ‘the people’s elbow’ of the Body of Christ and I’d just remind my frowning friends, “Chill out my brothers and sisters, we’re on the same team! And while you’re over there in the corner gagging over how short Sissy’s dress was in Church last Sunday; the rest of us are in the arena doing the heavy lifting. So lighten up!”

And to those pastors who don’t think that we should be doing anything but quoting John 3:16 – “Hey, Pastor Smalley; hang up the sweater vest and put on the armor of God. You are following the path that led to the Reich church in Germany. And the rest of us who are manning the wall, – my brothers who can discern the signs of the times; we will not just ‘sing a little louder’ when the trains roll by. God has called you to be a watchman on the wall and he’s handed you the shofar. If you don’t blow it when danger is on the horizon, the blood will be on your hands. Get off your sass and teach the whole counsel of God. God did not raise you up to blow sunshine into tickled ears. If you can’t handle the job description then hang up the spurs and go sell Sham-wows.”