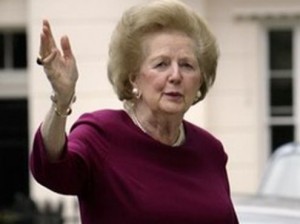 Margaret Thatcher, one of the greatest leaders of the Cold War, of the 20th century, and of British history, has died at the age of 87.

I’ve referred to her as one of my Cold War seven: Ronald Reagan, John Paul II, Mikhail Gorbachev, Lech Walesa, Vaclav Havel, Boris Yeltsin, and Margaret Thatcher. They were the seven figures who dissolved an Evil Empire, and only Walesa and Gorbachev still remain with us.

The world dubbed her the Iron Lady, a title that duly fits. Many, however, mistake the Iron Lady moniker as referring solely to her strength in the Cold War. There was much more to it. Consider:

Margaret Thatcher is arguably the most complete British leader of the last 100 years, surpassing even Winston Churchill. Like Churchill, she was tough and successful in foreign policy, taking on and vanquishing totalitarian evil. Churchill warned the world as the Iron Curtain descended across Europe. Decades later, the world celebrated as the Iron Lady helped break the Iron Curtain.

But unlike Churchill, Margaret Thatcher had enormous domestic successes that Churchill couldn’t touch, and didn’t dare try to touch. When World War II closed, the British people booted Churchill from the prime ministership in preference of Labour leader Clement Attlee, who gave the British populace Keynesian socialism. The masses wanted their welfare state, and Attlee, equipped with promises of “change” and “forward,” gave them a fundamental transformation. In no time, Attlee’s party was spending money unlike anything Britain had ever seen, nationalizing everything under the sun, including with the progressive left’s coup de grace: government healthcare. It was a giant government binge that would bury Britain for decades.

This fundamental transformation to welfare-statism was so thorough, and so imbibed by the electorate, that when Churchill later returned to office for another term (1951-55) the World War II hero couldn’t stand up to the sacred cows of Britain’s new nanny state. By the late 1970s, the United Kingdom was smothered not only by massive government expenditures and debt but by the enormous and disastrous government unions that the Labour Party had built and nurtured.

All of this came to a crashing head in the late 1970s, and fittingly under the Labour Party, this time led by Prime Minister James Callaghan. The signature event was the Winter of Discontent (1978-79). The economy was an utter train wreck, debt-ridden and hampered by a prolonged un-recovering “recovery.” Things were made far worse by continual work stoppages by striking public-sector unions. Given that the government ran just about everything, thanks to decades of the British left nationalizing everything, there was garbage literally rotting in the streets and dead people not being buried because of striking government refuse workers and gravediggers.

Things got so bad that the British electorate was willing to elect a bona fide conservative to run their government: Margaret Thatcher. This was not some squishy moderate that we in the United States would have called a Rockefeller Republican or (today) a RINO. This was the real McCoy; the genuine article. Here was a new leader who actually understood and could articulate what was wrong with Britain—and had the courage to do something about it.

And so, Margaret Thatcher, Britain’s first-ever female prime minister, embarked upon an extraordinary run from 1979-90 that featured three consecutive electoral victories, including the landslide that brought her to power. She then proceeded to take on not just the Soviets abroad, but, at home, the powerful government unions, the Keynesian spending, the bloated cradle-to-grave welfare state, the punitive taxes, the burdensome regulations, and decades of government nationalizations/seizures. As to the latter, Thatcher began a comprehensive campaign of privatization that returned freedom, solvency, and sanity to Britain.

It was an amazing performance. You can now expect a remarkable outpouring of emotion and appreciation in Britain, much like what America saw with the death of Ronald Reagan and what the world witnessed with the passing of John Paul II, her two Cold War partners and kindred souls. And like her two great Cold War allies, she fortunately lived to see the collapse of the Soviet empire.

Lady Thatcher outlived both Reagan and John Paul II. Her health, unfortunately, had been in decline for a long time. I recall that she recorded a video eulogy for Reagan’s funeral rather than address the audience live and directly. That was 2004, almost 10 years ago.

And now, we can second that tribute. Well done, Lady Thatcher.