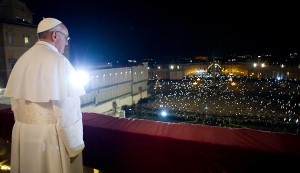 It was an astounding event. Truly remarkable, and clearly historical. Truth be told, I had never seen or experienced anything quite like it.

It happened in one of the wealthiest and most powerful cities in the United States. Indeed, in the world.

The setting was most fitting. A magnificent cathedral with giant stained glass windows through which the sunlight poured through onto the congregation. Massive arches soaring upward, drawing the earthbound to heaven. This was the scene when the cardinal archbishop, took to the pulpit.

He stood there at the ambo facing his congregation with a kind but determined face, exuding a confident faith. He was clothed in red vestments. The color of the martyrs. The color of faith and courage.

Before him were the rich and the powerful, and the not so rich and powerful. There were also Catholic politicians and bureaucrats. Administrators and professors of Catholic universities. Lay men and women. Also present were members of the hierarchy of the Catholic Church in America.

He paused for a moment until there was almost total quiet.

He looked intently at the entire congregation seated before him. Then he began to speak. He spoke firmly, and his words were clear and direct.

Like Hosea the prophet he said to them all: “There is no fidelity, no mercy, no knowledge of God in the land. False swearing, lying, murder, stealing and adultery! In their lawlessness, bloodshed follows bloodshed…So must a people without understanding come to ruin.”

There was silence, and then he began to speak again.

He called out the professors and university presidents: “Some of you have been faithful, but far too many of you have not, and to you in particular I direct my words.” With the words of St. Paul, the cardinal rebuked them: “You want to be teachers, but you do not know what you are talking about or what you so confidently affirm. The last two popes, both saintly men, asked you to make your colleges and universities centers of faith and Catholic learning, but in your over weaning pride you refused, and made them places of lies and immorality. You blasphemed the very God who made you and gave you the intellect which you have wasted on evil. If you will not teach the truth why do you even call yourselves teachers? If you insist on attacking the Magisterium then how do you call your institutions Catholics?  Shame on you and your perverse pride and greed which has lost countless souls, souls for which you will be held accountable before Jesus Himself.”

Like Hosea the prophet, he indicted them: “Your heart is false. You have cultivated wickedness, reaped perversity, and eaten the fruit of falsehood. You have taught falsehoods to your students, and deceived young minds. You are rebellious against God, and your lies and falsehoods are many. Repent and come back to the God who loves you!”

Then he called out the Catholic politicians. “To those of you who follow the Lord in your work I exhort you to be steadfast in your faith. To those of you who trade on the moral poison of abortion, euthanasia, and the defilement of marriage for votes and campaign money, my words are intended for you.”

His voice rose, and like Jeremiah he shamed them: “You who, in your wickedness, have gone by ways unclean! On your clothing there is the life-blood of the innocent whom you found committing no wrong.”

His eyes flashed, as did his vestments when he gestured toward them. “You worry about all manner of inconsequential and transitory things, many of them evil, to make yourselves look good. But you cannot muster the strength and courage to uphold the truth. You are content to allow the destruction of life and family, and to risk the well being of future generations for mere votes and for your present political power.” Like Micah he accused them: “Hear, you leaders, rulers of America, is it not your duty to know what is right, you who hate what is good and love evil?”

He went on: “You conspire in your legislative chambers and executive offices to kill the innocent in the womb and the vulnerable on their death beds. You sacrifice Holy Matrimony for money and power. You are a nest of vipers! White washed sepulchers! But you do not stop even with such shameful conduct. Corrupted by your public sin, you still dare to come to the altar of the Lord Jesus without a scintilla of remorse to partake of the Eucharist, the Sacrament of Life, and profane God Himself. Woe to you if you do not undue what you have helped to create. Repent and come back to the God who loves you!”

And to those here in this great cathedral who voted for politicians who kill the innocent in the womb and on their death beds, and who destroy marriage, he remonstrated with them: “Why do you vote for those who will give you favors at the price of shedding innocent blood and destroying the family? Are you so selfish?” He condemned them, poor and rich: “You vote with your stomachs and your wallets, and abandon those who need your help. You support those who kill the defenseless and who attack your marriages and your beliefs. Yet you act as if nothing is wrong with such conduct. You have sown the wind, and will reap the whirlwind. Wash the sin from your hearts, and cleanse the wicked from your government! Repent!”

Lastly he addressed his fellow bishops present before him. He repeated to them the words of Jesus as told by St. Luke: “Scandals will inevitably arise but woe to him through whom they come. He would be better off thrown  into the sea with a millstone around his neck.” He reminded them that as shepherds charged by holy oath to defend the truth and the souls entrusted to them, many, too many, allowed into their seminaries pedophiles, and even more ephebophiles. He reminded them too that many of them then ordained those predators, and sent them to rectories and schools and orphanages where they abused innocent children.

“Unimaginable damage was done to the Church and its moral authority in our increasingly secular society. To our everlasting shame, most bishops did not speak up,” he said, “but rather tried to hide the sins committed against the innocent for fear of bad publicity and a bad record in Rome. The lives of children and the souls of many were bartered like human commodities in exchange for a good reputation, and no interruption in Sunday collections and capital campaigns.”

He went on. “Instead of apologizing in true humility to the faithful whose children and whose trust were abused, we have consulted our lawyers and our insurance carriers, and created our commissions and safe children offices, and we take money from our flock to pay for these structures that make us feel good and look responsible. But we, the bishops who brought this on the faithful in our charge, including those who were even themselves among the predators, live on without personal consequences.”

“And no less damaging to both our flocks and the society in which we live has been our uncritical acceptance over the last half century of the increasing power of the central government, a power which has yielded ever increasing licentiousness and ever increasing limitations on our religious freedom. We refused to see that the largesse of the secular state is not without the price of submission to the state, and is not Christian charity, but cheap charity.

“With good intentions we embraced the unlimited welfare state, but now find that we have been complicit in creating a society increasingly dependent on on a secular, anti-Christian government for its physical and social needs. Instead of bringing men and women to depend on God their creator, we have delivered them to the temple of the false god of the state to which they look for the satisfaction of their needs.”

He looked straight at them and told them: “Our conduct has been disgraceful and unjust, and I say to all bishops: Shame on all of us for our failure to protect our flocks and for losing souls given to us to lead to heaven. Shame on us for leading the faithful to Caesar instead of showing them the way to God. We can no longer hide in the comfort of our chancery offices. The new evangelization begins with us. Each of us, not just our our priests and lay employees, but each of us individually are called now, this very day, to go into our dioceses and into society, and put our lives on the line for the Truth of Jesus Christ. And if you are not with Jesus then you are against Him. Woe to us if we do not do this!”

He stopped speaking. He was finished, and there was absolute silence in that great cathedral.

Then I woke up from my dream.

But when I then turned on the television there was white smoke coming from the Sistine Chapel. Later, a humble priest who had spent his entire life preaching the Gospel of Jesus Christ, in season and out, challenging both rich and poor, both the powerful and weak, both the educated and ignorant to follow the Savior, was introduced to the world as Pope Francis. And this was not a dream.