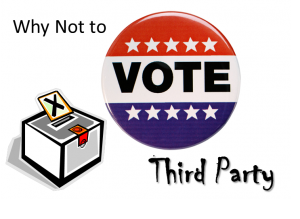 Never before in the history of our country have we faced such a monumental and critical decision as in the 2012 Presidential election.  The transformation we face is something that may very well permanently alter the very structure and freedoms our nation has enjoyed for over 200 years to the point where we may never recover.

It is important to remember that in casting our vote, we are not choosing someone who is our personal idol, fitting nicely into our own perfect comfort zone; our own vision of ideology, morality, personality or religion.  We certainly may choose our spouses, friends, employees and places of worship based on our such standards, but electing the next President of the United States is not a personal choice, it’s  a patriotic one.

So when very good-intentioned people talk about casting their vote for a non-electable 3rdparty candidate or maybe even not voting at all, it is not only alarming but perhaps one of the most irresponsible choices a person could make.  And while it is quite true that a person must follow their moral conscience in making important decisions, it is imperative that in this case especially, one must have a properly formed conscience.  Because my friends, this time there is no room for error.

We have heard enough from those who are adamant that they will not settle for the “lesser of two evils” but such is not the case.  Because in reality those choosing a non-electable candidate have already selected a greater moral evil, rather than choosing the greater moral good of the country. That is, they jeopardize the election of a viable candidate who has the ability to lessen abortion, if not eliminate it entirely.

Some have gone so far as to quote from the Papal Encyclical Evangelium Vitae, section 73 to determine that it is wrong to vote for a candidate whose position on abortion is one that would allow exceptions only in the cases of rape or incest.  But abortion is not the only major moral issue facing voters.  There are in fact, five “non-negotiables” in our voting considerations of which one presidential candidate has failed miserably in all five.  They are: abortion, embryonic stem cell research, human cloning, euthanasia and same-sex marriage.  So if one is going to look at that lesser evil argument there is a lot more on the table to consider.

In addition, not only has there never been a viable Presidential candidate who did not believe in abortion exceptions since the inception of Roe vs. Wade, the Catholic document in question is also being erroneously interpreted.

To begin with, Evangelium Vitae does not discuss candidates; rather, Pope John Paul II discusses voting for enactment of laws.

“In the case of an intrinsically unjust law, such as a law permitting abortion or euthanasia, it is therefore never licit to obey it, or to “take part in a propaganda campaign in favour of such a law, or vote for it”.

Clearly, there is a major difference between voting for a Presidential candidate who in his future position has no authority to introduce a new law or amend an existing one, versus a law itself that would be immoral.  No future President will make laws himself; Congress does.  However, that future president does have the power to approve or veto pro-life or other morally sound legislation handed to him by Congress.

And of even greater importance, which one would appoint pro-life justices to the Supreme Court?  Justices Ginsberg, Scalia, Kennedy and Breyer are all in their seventies and considering retirement. The next president has the potential to tilt the Supreme Court with like-minded justices for decades.

Now one must ask themselves if they are truly pro-life: what about THOSE “exceptions”?  Is not every life sacred?

One might compare this to a person who notices 10 people in the water drowning.  His lifeboat only has room for seven so does he say, “Well I can’t save them all so I will let them all drown?” Would he not instead try to save as many as possible?

Just what does Evangelium Vitae say about this situation?

“A particular problem of conscience can arise in cases where a legislative vote would be decisive for the passage of a more restrictive law, [ie, the presidential power to veto or enact the law handed to him by Congress] aimed at limiting the number of authorized abortions,  [emphasis added] in place of a more permissive law already passed or ready to be voted on… In a case like the one just mentioned, when it is not possible to overturn or completely abrogate a pro-abortion law, an elected official, whose absolute personal opposition to procured abortion was well known, could licitly support proposals aimed at limiting the harm done by such a law and at lessening its negative consequences at the level of general opinion and public morality. This does not in fact represent an illicit cooperation with an unjust law, but rather a legitimate and proper attempt to limit its evil aspects” (John Paul II, Encyclical Letter Evangelium vitae [25 March 1995], n. 73)

Now in this context, Pope John Paul II notes “an elected official whose absolute personal opposition to procured abortion was well known” as a guiding criteria. So what happens when the candidate personally supports exceptions in the case of rape or incest?  Does this disqualify him as one we could legitimately vote for?  Hardly. Because that presidential candidate would be making “a legitimate and proper attempt to limit its evil aspects.”

This brings us to the central question:  Can a person in good conscience vote for another 3rd party candidate who may be opposed to abortion in all cases but has no chance of winning the election?  If one follows what the Pope said, the answer is obviously negative since in doing so, they are doing nothing to limit evil.  Catholic or not, if the person is truly pro-life, the answer should still be glaring.

A third party, no-exceptions, 100% pro-life candidate who has absolutely no chance to become elected could ironically, very well ensure the guaranteed slaughter of millions more babies by his very presence on the ballot.  For it is not righteousness or goodness that compels a Presidential candidate to continue his campaign when it is clearly lost, but rather, self-indulgent arrogance.

It’s difficult to imagine just how such a candidate sleeps at night knowing that his own egotistical political pontificating will lead many very good intentioned people to feed his ego with their vote. And in doing so, the slightly less-desirable candidate may very well lose to the obviously evil one. That is neither righteous nor honorable on the 3rdcandidate’s part; it is wickedness.

Likewise, if a person were to write in a candidate of their choice who has no possible chance of election, that person feeds their own wounded self-image, but does nothing to further the prolife cause and in fact, may very well damage it for years to come.  Because without question when the votes are counted, we will either get pure adulterated evil for at least the next four years (and perhaps, permanently) or we get at least a fighting chance to make changes, convert middle of the road hearts and do the greatest good possible right now for our country.

We are given an enormous responsibility and privilege in voting in this upcoming election. If we do not do all in our power to mitigate wickedness, we are no better than the useless servant in the Gospels who buried his talents; he has no profit, no gain, to give his Master.  And what will Our Lord say to such a person who had the ability to help make a positive difference but did nothing?

“And cast the unprofitable servant into the outer darkness. There will be weeping and gnashing of teeth.” (Mt 25:14-30)

Originally published at Children of God for Life.