Trending Now
You are at:Home»Featured»The Human Body in a “Mad” World
By Genevieve Kineke on June 6, 2012 Featured, On Media 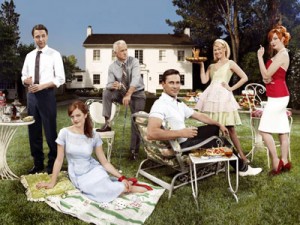 Those who are up-to-date on the television series MadMen have an interesting episode to chew on as they await the season finale, but in the limited discussions I’ve followed since it aired, I have yet to see any reference to what I found the most profound point: the reverence due to the human body.

Many people, it seems, were disappointed in the predictability of Lane’s suicide, which most people have anticipated for some time now. Viewers appreciated some of the details—the breaking of his glasses, the irony of the temperamental Jaguar, and the intrigue of whether Don would eventually reveal that embezzlement led to the distressing deed. Indeed, landing the Jaguar account as a whole has proven to be quite an ethical Disneyland for the employees, as the prestige it signifies allows each partner to consider the price he’s willing to pay for the thrill. But all of those considerations were obvious.

What I saw in the episode were two seemingly unrelated stories coalescing into one. Besides the tragedy of Lane’s choices, there was the story of Sally, an angry young girl caught between two self-absorbed parents, Don and Betty. She endured their eventual divorce and ensuing marriages, with each seeing her more as annoyance than person. Since she didn’t want to go on a ski vacation with her mother, Sally acted out in the most insolent way possible, ramping up the decibels of rudeness until her mother relented and sent her to spend the weekend with her father. There—unannounced and inconvenient—she could proceed with a surreptitious plan to meet with a young man.

So with this backdrop, the story culminated with Lane barricading himself in his office and hanging himself, and Sally shocked to discover her first period—leading her to quietly duck out of her rendezvous, and causing panic by her disappearance. Why are these related? What could possibly connect such disparate stories? They overlapped because both come down to the human body and our relationship with it.

As tragic as Lane’s desperate move was, what fascinated me was the reaction. Don, being the last to arrive at work Monday morning, found the partners in shock and disbelief. His own shock intensified to learn that no one had cut the body down. Astonished, he barrelled his way into the office and undertook the macabre task without delay—for despite all his faults, his sense of decency compelled him. One doesn’t leave dead bodies hanging from cords out of reverence for the person.

Likewise with the other story. Everyone was upset with Sally—for her rudeness, her lies, her escape, and her lack of consideration for all who loved her. And yet, all was swept aside when the reason was discovered. The war with her mother dissolved (for the moment), Don’s wife, Megan, who was frantic with worry forgave all—knowing that it’s deeply traumatic and a confusing time for girls. Indeed, in this instance it was worse, for Sally was an abandoned child stepping into womanhood in a conflicted age amidst a crumbling culture.

So we have a fiercely competitive advertising agency which sees people as consumers, employees as foot soldiers, clients as their arsenal, and human cravings as fodder for wealth. Almost every person in the office has transgressed his own dignity through a multitude of grievous sins, and the brilliance of the series is its honest portrayal of the unraveling of morality. The integrity of the script allows each character to draw his line in the sand—indicating what he will not do—and then move it, justifying it all the while. The meltdown is inevitable.

That is why this episode was so fascinating. For all the buttresses and categories that were constructed to depersonalize humanity, it came down to a dead body and a young girl’s period. Each had to be given proper reverence. For all their myriad faults, Don the father and Betty the mother came through. One laid Lane reverently on the sofa to await the coroner, the other laid the bewildered young girl to rest on her own bed. Don’s wartime experience gave him the manly courage to do his task, and Betty instinctively knew that only a mother’s embrace could begin to comfort her child.

The MadMen death spiral will continue—we know because we’re still enduring it all these dark decades later. But the lesson we cannot ignore is that persons have an inherent dignity, the human body deserves reverence, and those who set their own comforts aside in order to attend to that truth will brighten the gloom and illuminate that which endures.

On to the finale.