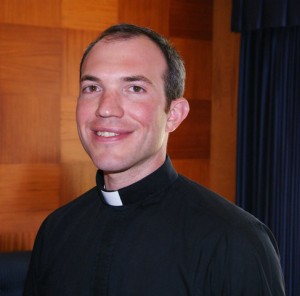 God’s ways are mysterious and marvelous.  I had the great honor of attending World Youth Day 2002 in Toronto.  And it was there that I marveled at the work of the Spirit in my own life.   As I walked the streets of Toronto, attended the workshops, observed the spirit and enthusiasm of thousands of young men and women from around the world — my heart was full of deep memories. And it was filled with a fresh spirit of joy.  The excitement of John Paul II’s arrival that day electrified everyone.  But it was a bit surreal for me.  As I took in the experience and watched the reaction of the many people around me, my heart was more or less silent.  My mind filled with images and memories from a decade earlier.  On this day in Toronto my heart was filled not so much with the joy and excitement of the moment, but with a deep sense of wonder and gratitude at the working of God.

You see, almost exactly ten years earlier, as a high school junior, I was at World Youth Day in Denver, Colorado.  After coming off of a few tough years in middle school when I had serious doubts about my Catholic faith, I was once again curious about God and opening back up to His presence.  At that same time the Catholic Youth Ministry in my hometown of Oil City was organizing a trip with the Diocese of Erie to the upcoming World Youth Day.  It caught my interest.  I’m not sure why, but it did.  I checked it out, signed up, raised the money and found myself on a plane to the mountains of Denver.  In the first days of that week we had Masses with Bishop Trautman of Erie and with other groups from around the country.  We attended workshops, concerts, and penance services.  We were even present at Mile High Stadium in the pouring rain for Pope John Paul’s arrival by helicopter.  All of these experiences were exciting and fun, but not really all that significant for me.

At the end of the week in Denver, we hiked out to Cherry Creek State Park for the all-night prayer vigil.  More than one-hundred thousand young people from all over the world were camped out in this enormous field.  Sleeping bags and backpacks were arranged nearly as far as the eye could see in every direction.  Throughout the evening we participated in the prayer vigil, sang hymns, chatted and simply enjoyed the time with each other as we awaited the morning’s Mass with the Holy Father.

As the night drew on, my friends and fellow pilgrims from Erie one-by-one drifted off to sleep.  By about 4am, I was the only one still awake on our little piece of land.  I was tired, but couldn’t quite sleep.  A restlessness was within me.  I walked quite a distance throughout the camp.  There were pockets of people awake here and there.  I came across a group of young people with guitars sitting in a circle laughing and singing in French.  I came across another group bantering in Spanish, and yet another in a language unrecognizable to me.  I was amazed.

For the first time I realized how amazing God and his Church is.  I realized that our Catholic faith was more than just my own experience in Oil City or in Northwestern Pennsylvania.  I could not speak the same language as these young people around me — but yet we had an automatic kinship.  We were there because of Jesus.  We were there because there was a yearning within us for something more.  We did not share the same nation, customs, or even continent.  But we shared the same God.  We could not speak to each other…but we automatically knew more about each other than words could convey.  We shared the same faith — and all of the sudden these strangers became sisters in brothers, and the world in my mind became a much smaller and more friendly place.

At that moment I experienced exhilaration unlike any I had ever known before.  And as I continued to walk, observe, reflect, pray, and then drift off to a short hour of sleep, a thought continued emerging in my heart.  The thought was this:  Chris, this Church is beautiful.  This Church is powerful.  This Church is Christ.  Chris, you could set aside your other goals and aspirations and serve this Church as a priest.  This thought had never even so much as crossed my mind before.  But in the darkness and quiet of those early morning hours — something very new was stirring within me.

Jesus tells us that, when two or more are gathered in His name, He is there with them.  When hundreds of thousands are gathered together in His name, the Spirit is powerfully at work.  I greatly benefited from that action of the Spirit.  It was at a World Youth Day that I first heard the invitation to the vocation that I now deeply love.  And it was at another World Youth Day that I first exercised that ministry which the Lord entrusted to me.  God’s ways are mysterious and marvelous!

Fr. Chris Singer is Chancellor  of the Catholic Diocese of Erie.