Presented in cooperation with Greg Schlueter and JP2Journey.com: The JP2 Generation Tells Its Story,  remembering World Youth Day 2002 and the impact of Pope John II. 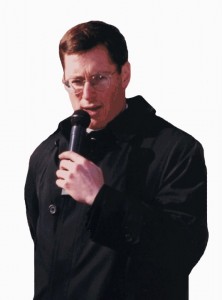 It was September 2001.  I was ordained a priest for the Diocese of Erie four days before the horror of 9/11.  I was asked if the events of that day dampened the enthusiasm of my mission as a priest.  I responded that the existence of evil revealed by the terrorist attacks only strengthened my resolve in my mission… to testify to the only answer to such evil in our world: Jesus Christ!

This was the context for what follows.  I was asked to be a part of the Erie Diocesan Pilgrimage to Toronto for World Youth Day in July 2002, not only as an adult leader for the 25 pilgrims from my parish of St. Jude the Apostle but also as the Spiritual Director for the Diocesan Team which would oversee and lead the 500 pilgrims of the Erie Diocese.  As daunting as this task seemed, it was the perfect opportunity to jump into my priestly mission with both feet.  Here was a chance to share with my parish and diocesan community a dimension of our universal church that I had been so blessed to experience intimately during my four years of study in Rome.  This was a chance to see, pray with and encounter the Vicar of Christ on earth, Pope John Paul II, while also gathering with hundreds of thousands of other young people from around the world who held the same beliefs.

This was a decision I would question over the 10 months leading up to the pilgrimage, but one for which I will be grateful for eternity. I say ten months because we were asked to participate in 10 months of prayer and meetings to prepare for the journey.  Following a format that had been used for several years already in the Diocese under the title “Journey to Emmaus” (byline: “The Journey is for Eternity”), in 2002 it was decided that the culminating “JTE” event (as it became affectionately known) would be the pilgrimage to World Youth Day and there would be monthly meetings to prepare for that event.  We stressed to all the pilgrims that in addition to being a lot of fun and seeing new places, the focus of the journey was to grow closer to God through prayer, Christian fellowship, learning and offering up any hardships as a sacrifice for our particular prayer intentions, for our Church, and for protection of all life from conception to natural death.  This foundation of prayer and preparation allowed our group to sustain such a positive attitude and spirit of true Christian joy throughout the entire journey, as arduous as it was at times.

Day one of the pilgrimage, Sunday, July 21st, was unique from the rest of the days because it involved staying in Erie, PA.  All pilgrims were invited to meet on the campus of Villa Maria Academy for an opening celebration that started in the afternoon.  This also allowed other youth and adults who could not make the entire trip to be a part of the experience, at least for this day.  Despite the intense heat, everyone joined in the games and activities, as well as the music, skits, dramas and prayer.  The highlight of the celebration for me was the Ceili Rain concert which concluded the night.  They brought a lot of energy to the group and helped get us “fired up” with the Spirit before departure the next morning.  At the conclusion of the concert, some pilgrims stayed overnight at Villa while others left for one last night of the “comforts of home.”

I remember this day being a great local start to the pilgrimage.  But there was no way to anticipate the incredible journey that lay before us, culminating in our time spent with the Roman Catholic Church’s spiritual leader, Pope John Paul II.  Even though I was blessed to have met him during the late nineties and spent numerous other occasions in his presence at the Vatican, there was something special about this encounter.  First, it was the last time I would be and pray with him before his death in April, 2005.  The last moment with any loved one is a memory we typically cherish, and that is even more the case with this memory of the Pope.  As the world mourned the death of this great man and turned out in such remarkable numbers to do so, I found myself recalling our reaction as his helicopter approached Exhibition Place in Toronto for the first time-a reaction of utter thrill and excitement- which intensified as the Pope-mobile drove through the crowds on its way to the stage.  I remembered the great Mass we celebrated with him on the last day which started out in a storm of rain and strong winds and ended in sunshine and a refreshing breeze.  I will never forget the Pope spontaneously by-passing the planned Sprinkling Rite at the Mass and commenting that we were already sprinkled by God through the rain that had persisted through the night and into the morning.  To this day I thank God for those wonderful memories and the great grace brought by being in the presence of such a living saint.

But there was another dimension to this experience of the Pope that was even more unique and moving to me.  It’s a great gift to visit the Pope oversees, in the Papal Palace and magnificent surroundings of St. Peter Basilica and Square.  But there was something more special about Pope John Paul II coming to be with us, to spend time with us in “our own back yard.”  This was one of the most remarkable aspects of Pope John Paul II’s papacy,  that he traveled more than any other pope in history.  He made an effort to tell his flock that he cared enough about them to come to them.  And that truth hit home for me in Toronto.

This gathering in Toronto also helped me experience the unity of the universal church represented by the pope and the hundreds of thousands of Catholics from other countries and my local church of home.  It was a reminder that we were part of something far greater than our immediate, local church– reminding me of the great gift my parish and diocese are to me.  It was as complete an experience of the Mystical Body of Christ, the Church, that I ever had, and I will never forget that.

Meeting a living saint in the person of John Paul II also helped make my call to holiness more real.  It reminded me that the saints were real people.  John Paul reinforced for me that the Christian standards of our faith and the scriptures are attainable, not just hundreds or thousands of years ago, BUT NOW in THIS generation, in THIS society, in THIS age.  My prayer is that the beatification of this great saint of our day will make the call to holiness more real for people everywhere.  His authentic belief in the truth of our faith and his personal relationship with our God fed through his deep prayer life are an example and inspiration for everyone.

I mentioned at the beginning of this reflection that Jesus is the only answer to the evils and challenges of this world.  No where have I seen or heard that truth lived out and witnessed more powerfully than in the life of Pope John Paul II.  He has made me a better believer, teacher, lover and priest.  I hope his example and prayer can do the same thing for you!  Praise be Jesus Christ, now and forever!