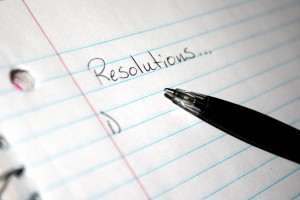 I suggest making one last resolution for the New Year: stop making them.  Within the first month, most people have broken their resolutions anyways.  Ask any health club manager about the January spike that levels out by February.  You don’t need the first day of January to improve your life; you need God.  Life is lived daily–moment-by-moment–not year-by-year.

Get Out of the Boat

Rather than an annual resolution, resolve to live an amazing life simply by starting each day offering to do whatever God has in mind for you.  Great things are within your reach but you might have to get uncomfortable first.  Vow to not to back out or make excuses.  You don’t want to compromise what God has planned for you.

“You miss 100 percent of the shots you never take.” —Wayne Gretzky

“Courage is not the absence of fear, but rather the judgment that something else is more important than fear.”—Ambrose Redmoon

Spend time in prayer asking God to direct you clearly, then follow through.  Don’t be surprised if there are moments of hesitation or wondering if you should really do what you think God is asking of you.  Jeff Cavins, my co-author in the “Amazing Grace” book series (along with Matthew Pinto) calls it getting out of the boat.  He shared a story of God prodding him one day to tell a customer at the gas station where he was working, that Jesus loves him.  But Jeff did not want to do that.  “I didn’t want the guy to think I was a weirdo,” he said. But as Jeff watched the man in his business suit put gas into his car, the feeling grew stronger.

Jeff considered that St. Peter the apostle had asked, “Is that you Lord?” when he saw Jesus walking on the water on the Sea of Galilee.  But Peter had to get out of the boat to find out if it really was Jesus.

“Is that you, Lord?” Jeff wondered as the feeling persisted. He did not want to be disobedient.

“Hi,” Jeff said when the man came in to pay for his gas.  Then Jeff took a deep breath and decided to get out of the boat. “Jesus loves you,” he added, trying to make it sound as casual as How’s it going?

An angry expression and a tightened fist led Jeff to fear he might get punched in the face.  Instead, the man pounded the counter.  “What is going on?” he asked. “You are the third person who has told me that this morning?”  The man admitted that he used to walk with the Lord but no longer did. The three messages in a row, had given him pause.  Jeff’s obedience to God’s prodding gave the customer something serious to think about.

Assignments Come with Grace
Do not feel stressed about obeying God.  His assignments include the grace to accomplish them.  It is not about us, it is about him.  When St. Margaret Mary was given the vision of the Sacred Heart of Jesus and asked to make the devotion known, she asked, “Why me, I’m so lowly?”

Jesus responded, “If I could have found someone lowlier than you, I would have.”
With that in mind, lowliness is not a hindrance but an asset.  God works well with people who depend on Him rather than themselves.  Consider Mother Teresa, a simple, plain, humble nun who shook the world spreading God’s mercy.   She did it through simply responding to God’s direction each day.

Read!
Pad your day with prayer; indulge in the sacraments to stay close enough to God to hear him clearly.  Another way to improve your life and walked closer to Christ is to read good Catholic books.  Spiritual reading provides an ongoing source of inspiration and hones your character.

By feeding your soul on a regular basis, resolutions happen naturally and gently, not as a once-a-year plan to do something new.  Below are some of my suggestions for all-around spiritual development

The Holy Bible:  One way to listen to God is to read his Word.

Imitation of Christ by Thomas Kempis: This devotional classic is about following Christ.  Apart from the Bible, no book has been translated into more languages.

God’s Bucket List: Heaven’s Surefire Way to Happiness in This Life and Beyond by Teresa Tomeo:  The message is to live for eternity. “In the end we are responsible for our own salvation,” Tomeo writes.

These Beautiful Bones by Emily Stimpson: Body and Soul work together. Stimpson explains that Blessed John Paul II’s teaching on the “Theology of the Body” is about more than the bedroom; it is about making everyday moments extraordinary.

The Holy Land: An Armchair Pilgrimage by Fr. Mitch Pacwa, S.J.: I want to walk with Jesus. Gazing on the world he was born into magnifies the reality of the Word Made Flesh.

We are not New Year’s people, we are daily followers of Christ.  A once-a-year inventory and goal setting is inadequate.. And by serving God daily, we better serve ourselves this year and every year.  Happy New Year!  Happy New You!