Trending Now
You are at:Home»Arts, Leisure & Culture»On Books»Mystery of the Betrayer: Excerpt from Jesus of Nazareth, Part 2 by Joseph Ratzinger
By Pope Benedict XVI on March 2, 2011 On Books 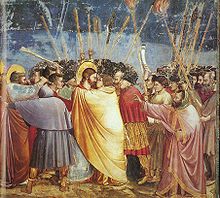 The mystery of the betrayer

he account of the washing of the feet presents us with two different human responses to this gift, exemplified by Judas and Peter.  Immediately after the exhortation to follow his example, Jesus begins to speak of Judas.  John tells us in this regard that Jesus was troubled in spirit and testified: “Truly, truly, I say to you, one of you will betray me” (13:21).

John speaks three times of Jesus’ being “troubled”: beside the grave of Lazarus (11:33, 38), on “Palm Sunday” after the saying about the dying grain of wheat in a scene reminiscent of Gethsemane (12:24-27), and finally here.  These are moments when Jesus encounters the majesty of death and rubs against the might of darkness, which it is his task to wrestle with and overcome.  We shall return to this “troubling” of Jesus’ spirit when we consider the night spent on the Mount of Olives.

Let us return to our text.  Understandably, the prophecy of the betrayal produces agitation and curiosity among the disciples.  “One of his disciples, whom Jesus loved, was lying close to the breast of Jesus: so Simon Peter beckoned to him and said, ‘Tell us who it is of whom he speaks.’ So lying thus, close to the breast of Jesus, he said to him: ‘Lord, who is it?’ Jesus answered: ‘It is he to whom I shall give this morsel when I have dipped it’” (13:23-26).

In order to understand this text, it should be noted first of all that reclining at table was prescribed for the Passover meal.  Charles K.  Barrett explains the verse just quoted as follows: “Persons taking part in a meal reclined on the left side; the left arm was used to support the body, the right was free for use.  The disciple to the right of Jesus would thus find his head immediately in front of Jesus and might accordingly be said to lie in his bosom.  Evidently he would be in a position to speak intimately with Jesus, but his was not the place of greatest honor; this was to the left of the host.  The place occupied by the beloved disciple was nevertheless the place of a trusted friend”; Barrett then makes reference to a passage from Pliny (The Gospel according to Saint John, p.  446).

Jesus’ answer, as given here, is quite unambiguous.  Yet the evangelist says that the disciples still did not understand whom he meant. So we must assume that John retrospectively attributed a clarity to the Lord’s answer that it lacked at the time for those present.  John 13:18 brings us onto the right track.  Here Jesus says, “The Scripture must be fulfilled: ‘He who ate my bread has lifted his heel against me’” (cf.  Ps 41:9; Ps 55:13).  This is Jesus’ classic way of speaking: he alludes to his destiny using words from Scripture, thereby locating it directly within God’s logic, within the logic of salvation history.

At a later stage, these words become fully transparent; it is seen that Scripture really does describe the path he is to tread — but for now the enigma remains.  All that can be deduced at this point is that one of those at table will betray Jesus; it is clear that the Lord will have to endure to the end and to the last detail the suffering of the just, for which the Psalms in particular provide many different expressions.

Jesus must experience the incomprehension and the infidelity even of those within his innermost circle of friends and, in this way, “fulfill the Scripture”.  He is revealed as the true subject of the Psalms, the “David” from whom they come and through whom they acquire meaning.

John gives a new depth to the psalm verse with which Jesus spoke prophetically of what lay ahead, since instead of the expression given in the Greek Bible for “eating”, he chooses the verb tr?gein, the word used by Jesus in the great “bread of life” discourse for “eating” his flesh and blood, that is, receiving the sacrament of the Eucharist (Jn 6:54-58).  So the psalm verse casts a prophetic shadow over the Church of the evangelist’s own day, in which the Eucharist was celebrated, and indeed over the Church of all times: Judas’ betrayal was not the last breach of fidelity that Jesus would suffer.  “Even my bosom friend, in whom I trusted, who ate my bread, has lifted his heel against me” (Ps 41:9).  The breach of friendship extends into the sacramental community of the Church, where people continue to take “his bread” and to betray him.

Jesus’ agony, his struggle against death, continues until the end of the world, as Blaise Pascal said on the basis of similar considerations (cf.  Pensées VII, 553).  We could also put it the other way around: at this hour, Jesus took upon himself the betrayal of all ages, the pain caused by betrayal in every era, and he endured the anguish of history to the bitter end.

John does not offer any psychological interpretation of Judas’ conduct.  The only clue he gives is a hint that Judas had helped himself to the contents of the disciples’ money box, of which he had charge (12:6).  In the context of chapter 13, the evangelist merely says laconically: “Then after the morsel, Satan entered into him” (13:27).

For John, what happened to Judas is beyond psychological explanation.  He has come under the dominion of another.  Anyone who breaks off friendship with Jesus, casting off his “easy yoke”, does not attain liberty, does not become free, but succumbs to other powers.  To put it another way, he betrays this friendship because he is in the grip of another power to which he has opened himself.

True, the light shed by Jesus into Judas’ soul was not completely extinguished.  He does take a step toward conversion: “I have sinned”, he says to those who commissioned him.  He tries to save Jesus, and he gives the money back (Mt 27:3-5).  Everything pure and great that he had received from Jesus remained inscribed on his soul-he could not forget it.

His second tragedy — after the betrayal — is that he can no longer believe in forgiveness.  His remorse turns into despair.  Now he sees only himself and his darkness; he no longer sees the light of Jesus, which can illumine and overcome the darkness.  He shows us the wrong type of remorse: the type that is unable to hope, that sees only its own darkness, the type that is destructive and in no way authentic.  Genuine remorse is marked by the certainty of hope born of faith in the superior power of the light that was made flesh in Jesus.

John concludes the passage about Judas with these dramatic words: “After receiving the morsel, he immediately went out; and it was night” (13:30).  Judas goes out — in a deeper sense.  He goes into the night; he moves out of light into darkness: the “power of darkness” has taken hold of him (cf.  Jn 3:19; Lk 22:53).

English translation provided by the Vatican Secretariat of State
Published by Ignatius Press San Francisco
Used by permission. Official worldwide release event for the entire book: March 10 at the Vatican

Click the link to preorder Jesus of Nazareth PART TWO Holy Week From the Entrance into Jerusalem to the Resurrection.  Or get the Kindle edition.