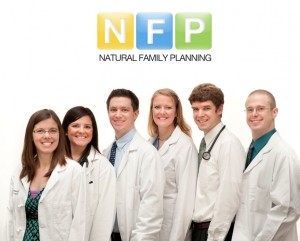 It was a month before she had to decide her specialty in medical school, and Brooke Jemelka found herself at a crossroads.

She had been concentrating on pediatrics during her studies at Texas A&M University, but by the end of her third year, she was starting to question what she wanted to do with her life.

Then she delivered her first baby, “and my whole life changed,” said Jemelka, a native of Yoakum, Texas.

As a Catholic, she was involved in pro-life activities, including sidewalk counseling, pro-life rallies and more. It was later that she realized that was preparing the way for a future in obstetrics and gynecology.

“I felt like there was no way I could not be doing God’s work,” she said.

Today, Jemelka is one of six — yes, six — resident physicians in the OB/GYN Residency Program at Mercy Hospital in St. Louis who plan to specialize in natural family planning in their future practices. As part of their training, the residents currently are caring for uninsured and underinsured women who come to Mercy’s JFK Clinic.

Each of them has a different story of how they became involved in medicine, but all of them agree that God put them in the place where they’re at now for a reason. While doctors here and around the nation who specialize in natural methods of fertility care are still considered the minority, all of these residents have encountered many women who want to know the truth about their fertility through the use of NFP.

First-year intern Jacob Peyton of Argyle, Texas, said as a Catholic, his family and friends were very supportive of his decision to focus on natural family planning. However, as a student at UT Southwestern Medical School in Dallas, he said almost no one was familiar with current natural family planning methods.

“They thought it was impossible to do OB/GYN without prescribing contraception,” he said.

Second-year resident Gavin Puthoff, a native of Austin, Texas, admitted he tried talking himself out of pursuing obstetrics and gynecology, but he realized, like the others, that “for most of us, a big part of what we do everyday is God’s work.”

Jemelka, who is a fourth-year resident, said she, too, was told by many during her medical school days that they “thought I was hanging myself out to dry” by focusing on natural family planning. Next year, she will be moving to Omaha, Neb., for a fellowship program at Pope Paul VI Institute for the Study of Human Reproduction.

Founded in 1985 by Dr. Thomas Hilgers, the institute is the home of the Creighton Model FertilityCare System, one of several Church-accepted natural methods of fertility regulation. It also is the force behind NaPro Technology, a medicine-based health science that monitors and maintains a woman’s reproductive and gynecological health, all within the realm of Church teaching.

While it’s common knowledge that practicing NFP-based medicine isn’t exactly mainstream these days, the residents and others have heaped their praises on Mercy for welcoming them into the program.

Jemelka said she interviewed with more than 17 residency programs around the country and found the process discouraging.

Several of those programs, including some at Catholic hospitals, even told her that she wouldn’t be able to practice medicine “according to my moral conscience.”

She said the reaction she received from Mercy was, thankfully, much different.

“This was a non-issue at Mercy,” she said. “Even on my first interview, I felt accepted and not judged based on my religious beliefs. I knew that my beliefs would be supported at this program without a doubt.”

First-year intern Alexis Simon said she, too, has been pleased with her decision to come to Mercy for residency.

“I know that my beliefs aren’t exactly mainstream, but nearly every person I’ve worked with has been supportive of me,” she said. “I feel so blessed to have been welcomed into this program.”

K. Diane Daly, supervisor of the Department of FertilityCare Services at Mercy and director of the archdiocesan Office of Natural Family Planning, said she gives “a lot of credit to Mercy for the support they give to these residents, for the hospitals that support these NFP programs, and to the archdiocese for the support they give to all models of natural family planning, which help empower women to be partners in their health care.”

St. Louis as a leader in NFP

It has been a slow and quiet process, but St. Louis is emerging as a leader in NFP-based health care. That’s a sentiment being echoed by Catholic health care organizations around the country.

Besides the six residents, there are five other OB/GYN doctors practicing in St. Louis. There also are several family medicine doctors, not to mention nurse practitioners, nurses and others who teach four methods of NFP here.

“I think St. Louis certainly has emerged as a real powerhouse for natural family planning,” said John Brehany, executive director and ethicist with the Catholic Medical Association. “Mercy Hospital in St. Louis has had an outstanding FertilityCare Services clinic since the 1970s, there is a strong Catholic Medical Association guild there with several all-NFP OB/GYNs, and the Archdiocese of St. Louis has provided substantial support over the years. I don’t know of any city or diocese which is doing it better.”

Daly, who travels around the world to teach and supervise others in the Creighton Model FertilityCare System, said she is seeing St. Louis emerging to the forefront of fertility care through natural family planning.

“It’s not the old rhythm method that your grandmother once used,” she said. “St. Louis has been outstanding in its leadership and support.”